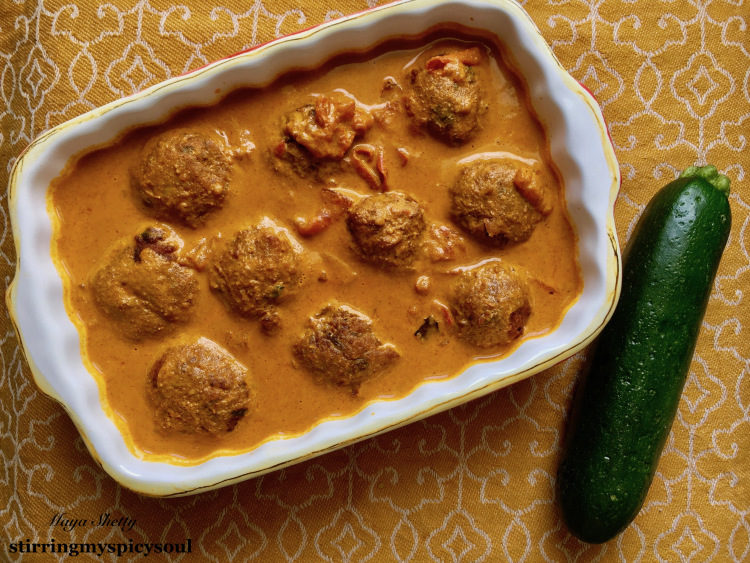 Zucchini (American )  or Courgette  (British)  is a summer squash which can reach nearly a meter in length, but is usually harvested immature at 15 to 25 cm. In the British Isles, a fully grown zucchini is referred to as a marrow.

Botanically, Zucchinis are fruits, a type of botanical berry called a “pepo”, being the swollen ovary of the zucchini flower.

Zucchini, like all squash, has its ancestry in the Americas. However, the varieties of squash typically called “zucchini” were developed in northern Italy in the second half of the 19th century, many generations after the introduction of cucurbits from the Americas in the early 16th century.

This week while I was at the Fresh Market doing my grocery shopping, I found an overload of Zucchini’s wherever I turned, so I picked a few in my basket planning to try some new dish with Zucchini’s . So they sat patiently waiting in my refrigerator, waiting for me to come up with a recipe. The motivation for stirring up a new dish for me, has always come from the weather outside.There was a chill in the air today, with the winds amping it up a notch, the craving to have some rich spicy curry was on my mind.Looking for inspiration, I opened my refrigerator, that’s when I spotted the Zucchini’s I bought two days ago.

Suddenly an idea started forming in my mind, a few weeks ago while browsing the net, I had spotted this recipe for Zucchini Kofta’s and thought it was an interesting recipe to try in a coconut based curry.Being a South Indian, Vada curry was something I had grown up with, meat ball curry was no stranger either, so Zucchini was something I could boldly try I thought, as I mixed the boiled potatoes, the grated zucchini & the chickpea flour together to make even sized balls…..my dream was taking shape.

Then I gently dropped them one by one in hot oil and fried them in batches.

Turn them over in hot oil, so they are cooked on both sides and appear crispy….

Now drain the oil, using a sieved spoon and place them on a bamboo tray lined with kitchen towels, so the excess oil may drain.

One can eat them as such as Kofta’s/Fritters or make small batches and add one half to the coconut based curry, and the other can be had with hot piping coffee as an evening snack.

For the curry, line the fried Zucchini Kofta’s on a flat dish and then gently pour the  spicy  and creamy coconut curry on top spreading it evenly, so they soak well before serving it.

The steps for making the Kofta’s and the coconut curry follows….

More of my Zucchini recipes, published earlier can be found here…