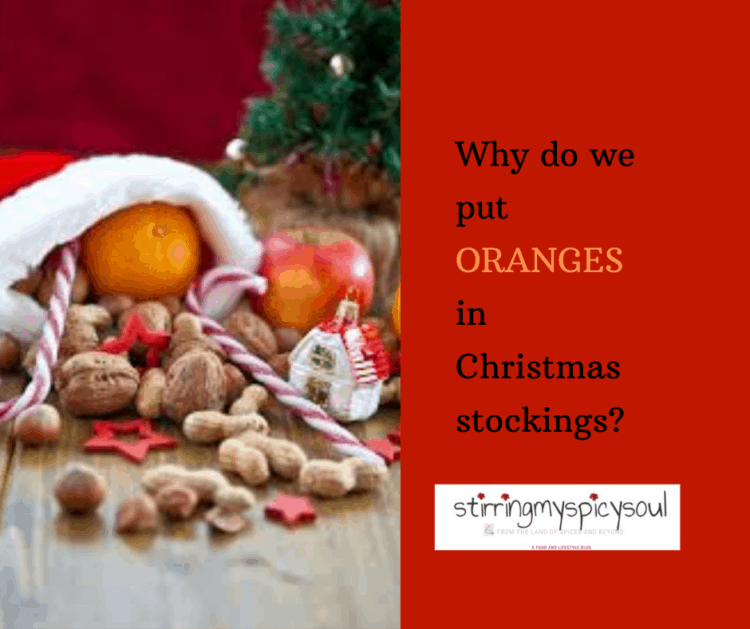 The most enchanting and mesmerizing sights during Christmas season is seeing Christmas stockings above the fireplace. It brings a warmth within that words can’t explain.There is something magical about it.Do you agree?

Oranges as a Christmas tradition

For centuries now Christmas stocking have been the centerpiece of Christmas tradition bringing lovely gifts to children and adults alike, on Christmas day. The traditional treasures left inside these festive stockings have special significance too.

One such treasure is the Christmas Orange!

Oranges have always been a tradition at Christmas time.

A tradition is the passing on of customs from generation to generation. For example, parents teaching their children how to cook a special food, or celebrate a festival in a certain way.

Putting oranges in the toe of a stockings is a Christmas tradition.

What does an orange represent at Christmas?

The practice of giving an orange in a stocking came from a story about St. Nicholas.Before coming into sainthood, St.Nicholas—who’s legend evolved into today’s Santa Claus tradition—was a generous, wealthy bishop.He was born in the 4th century of present-day Turkey.

St.Nick, once learned of a widower who was poor and unable to find husbands for his three daughters as he could not afford a dowry.However, the man was very proud and would not accept money or charity from others.The man worried about what would become of his very beautiful daughters after he died.

The story says that St. Nicholas, known for his kindness and generosity, had discovered the family’s misfortune and set out to deliver an extravagant gift.

On Christmas Eve, St. Nicholas tossed three bags of gold coins down the family’s chimney, where they landed in the socks that were hung above the fireplace to dry.

The family awoke the next morning and found the gold and were, of course, overjoyed at the generosity they had received anonymously. The daughters were then able to pay their dowries and wed, ensuring their father peace knowing they would be taken care of after he was no longer around.

The tradition of putting gold in stockings isn’t very easy to replicate. As a result, oranges (and sometimes tangerines) started being used as a representation of gold.

What is the symbolism of oranges?

Like many fruits, the orange has become predominantly a symbol of fertility; if it is depicted in Paradise. It is the fruit of the Fall. Orange can also mean luxury.

The history of Oranges on Christmas Day

Oranges were often reserved for only the wealthy and the elite, something only the very rich could afford to eat during the year. Before the 19th century, the trade routes, transportation types, and technology were far less developed than what we have today.

As a result, oranges were not easily accessible in non-native growing areas—meaning only the wealthy could typically afford such an exotic treat. So, you could imagine the jubilation of a poor or average person receiving such an incredible treasure in their stocking on Christmas morning.

Others claim the orange tradition was founded during the Great Depression and/or World War eras in the first half of the 20th Century. The Great Depression of the 1930s created financial burdens for millions of families. People didn’t have the means to buy gifts for their children.It was considered a true luxury to find and buy something as “exotic” as an orange for Christmas.

A season for giving

Today, Christmas is known as the season of giving. So, by stuffing stockings with oranges, we’re paying homage to both the gift itself and the intention behind it.

This story led to people hanging stockings by their fireplaces, hoping that they too might be blessed with gifts from others.

No matter the historical reasoning one chooses to embrace, the fact is that putting oranges in stockings represents the spirit of the season; giving generosity, giving joy, giving luck, and passing on tradition.

When should you open your Christmas stockings?

The time to open Christmas stockings differs in each household.

Are all presents from Santa?

Santa brings little things and stuffs the stockings with them. All other presents are “from” who they are (mom, dad, grandparents, uncles, aunts etc) from and are left beside the fireplace or under the Christmas tree.

Do you wrap presents in stockings?

The stocking is the “wrap” (less tree wastage!) Most stocking presents are wrapped in tissue paper and are small enough to fit into the stockings.

Today, the fresh fruit has been replaced by fun gadgets and other gizmos, but we’ll always love the idea of giving our friends and loved ones something sweet to eat.

What unique Christmas traditions does your family honor each year? Would love to hear all about it in the comments section below.

Interesting history of oranges in stockings, Maya! Thanks for the great post.

Thank you,Catherine, am so glad to know you found the blog post on oranges in stockings interesting.I have always enjoyed learning about different traditions, culture & people.The first time I learnt about the oranges in Christmas stockings, I was fascinated and understood why people do what they do.What a sweet gesture of gift giving and wishing more in the years to come!