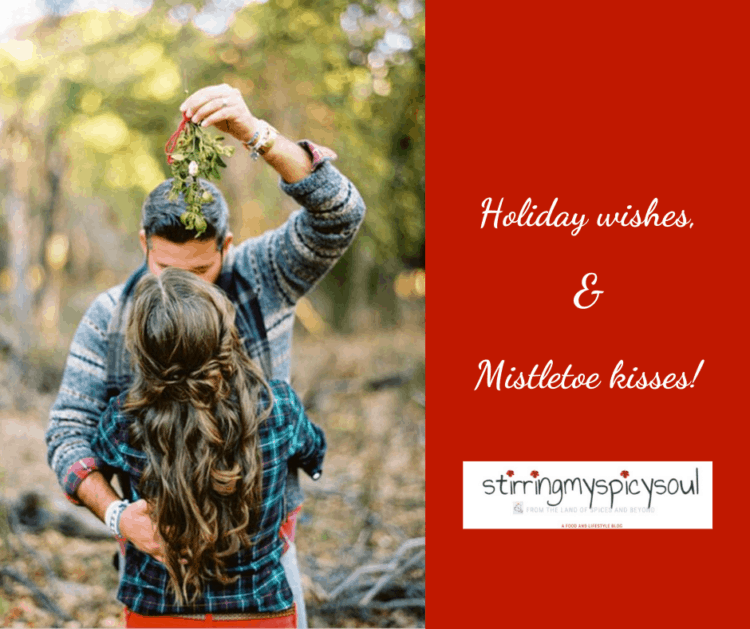 “To Kiss under the mistletoe” is one of the many holiday traditions followed during Christmas time.

The romantic act that brings together so many couples, be it in real life or Hallmark Christmas movies is rooted in ancient mythology. The mistletoe plant, itself holds a long history of cultural significance.

Irrespective of whether people understand the tradition, most are quite keen to follow along, for good measure!

Each home carries countless holiday traditions when the month of December rolls around, some which pre-date all of us.

The holiday tradition of lighting a Christmas tree, has been around since the 16th century,Germany. The tradition of hanging the Christmas stocking by the fireplace and placing an orange in the heel of the stocking can be credited back to the days of St.Nicholas.

Would you be surprised to know the idea of kissing under the mistletoe started before any of the others above?

Do you want to find out about many more such holiday traditions? Perhaps, you want to add some new ones to follow, this year? Some fun interesting ones to your family traditions? Looking for ideas, perhaps? No worries we have got you covered with our FREE E-Book on Holiday Traditions and more.

Find out how, below.

What is the significance of kissing under the mistletoe?

The tradition of kissing under the mistletoe started in ancient Greece, during the festival of Saturnalia and later in marriage ceremonies, because of the plant’s association with fertility.

During the Roman era, enemies at war would reconcile their differences under the mistletoe, which to them represented peace.

In the forest, mistletoe is a bit of a scourge, a parasitic plant that latches on to trees and feeds off of them.

But at Christmas, it becomes a symbol of romance.

What is the difference between holly and mistletoe?

In contrast, mistletoe is a parasitic plant grown in the crowns of oaks, apple trees, and other trees. It contains olive-green color leaves and produces white color berries.

Both the holly and mistletoe, form part of the holiday celebrations.

What is the myth of mistletoe?

The origins of kissing under the mistletoe, a plant that often bears white berries, are often traced to a tale in Norse mythology about the god Baldur. We have the goddess Frigga to thank for, mistletoe taking on even more of an amorous association.

As the Nordic myth goes, Odin, the god of wisdom, and his wife Frigga had a son named Baldur who was prophesied to be killed. Frigga met with all living things (plants and animals) urging them not to harm her son.

She forgot to reach out to the unassuming and non-threatening mistletoe, which Loki, the god of mischief, used to forge the spear that brought down Baldur.

Frigga revived her son under the mistletoe tree and decreed that, from that day forward that the plant would never be used as a weapon again. It would be a symbol of love instead, and she vowed to bestow a kiss on anyone who walked underneath it and protection from death.

During the same period, people would stand under mistletoe, trying to reconcile after an argument.It was supposed to have mystical powers of healing and ward off evil.

What does mistletoe symbolize?

Mistletoe is one of the four plants traditionally adopted to celebrate Christmas. It’s evergreen leaves symbolize ‘life that does not die’. Mistletoes is associated with fertility, long life, good luck, health and a good harvest in the months to come.

It is supposed to possess mystical powers which bring good luck to the household and wards off evil spirits.

It was used as a sign of love and friendship in Norse mythology.

What is the significance of mistletoe at Christmas?

Now, if are you wondering when the tradition of hanging mistletoe in the house during Christmas, came into play?

It’s not entirely clear how or when mistletoe first got pulled into all of the Christmas festivities, but its earliest mention seems to come from the work of Charles Dickens in his novel, The Pickwick Papers.

People of the time decorated their homes with kissing balls/boughs, which were made from trimmed evergreen, ribbon, ornaments, and mistletoe.

The rule was that if a young woman was caught standing under one of these balls, she couldn’t refuse a kiss or else she wouldn’t get married the following year.

It was also customary that a berry was plucked from the ball with each kiss that occurred underneath it.

What are you supposed to do when you find yourself under the mistletoe?

In ancient times, visitors would kiss the hand of a host under the mistletoe when they arrived. Since then, the tradition has grown a bit more personal.

Today, any couple caught standing underneath the mistletoe should prepare to pucker up!

What are the rules of mistletoe?

Under a sprig of mistletoe, a man must kiss the nearest lady only on the cheek.

Once the kissing is done, a berry must be removed from the mistletoe. When all of the berries are gone, the mistletoe has lost its kiss-compelling powers!

What should you remove after kissing under the mistletoe?

After every kiss, a berry should be removed from the bush and once all of the berries have been taken the kissing must cease!

Some cultures see a kiss under the mistletoe as a promise to marry.

What happens if you don’t kiss under the mistletoe?

According to tradition its bad luck to refuse a kiss beneath the mistletoe.

The correct mistletoe etiquette is for the man to remove one berry when he kisses a woman. When all the berries are gone, there’s no more kissing permitted underneath that plant.

Did you know that the mistletoe’s magical hold over holiday lovers goes back way before the first office Christmas party ? Here are some known facts about the holiday tradition:

If you are some one who follows all the traditions of the holiday season, or just a select few (Ahem!) and the mistletoe kiss seems to be one of them, make sure your bough of mistletoe this year, has plenty of berries on it!