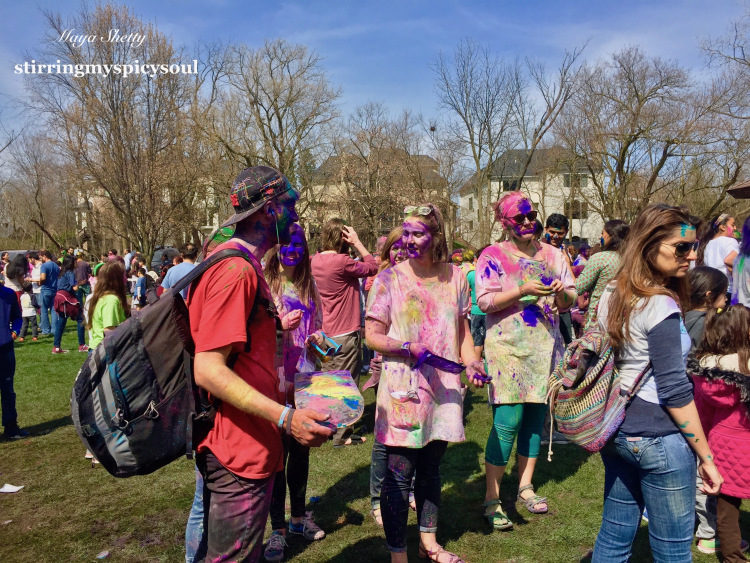 Holi is a Hindu festival celebrated in Spring, in India and Nepal. It is also known as the “festival of colors” or the “festival of love”. The festival signifies the victory of good over evil, the arrival of spring, end of winter, and for many, a festive day to meet others, play and laugh, forget and forgive, and repair broken relationships. It is also celebrated as a thanksgiving for a good harvest in parts of India.

“A free-for-all festival of colors, where people smear each other with colors and drench each other.Water guns and water-filled balloons are also used to play and color each other. Anyone and everyone is fair game, friend or stranger, rich or poor, man or woman, children and elders. The frolic and fight with colors occurs in the open streets, open parks, outside temples and buildings. Groups carry drums and other musical instruments, go from place to place, sing and dance.”

The Significance Of Holi – The Krishna Legend

In the Braj region of India, where the Hindu deity Krishna is believed to have grown up,

……the festival is celebrated in commemoration of the divine love of Radha for Krishna.

The festivities officially usher in spring, with Holi celebrated as a festival of love. There is a symbolic myth behind commemorating Krishna as well. As a baby, Krishna developed his characteristic dark blue skin color because the she-demon Putana poisoned him with her breast milk, according to Hindu mythology.

In his youth, Krishna despaired whether the fair-skinned Radha and other girls would like him because of his skin color.

His mother, according to  Hindu mythology ,tired of the desperation,  is believed to have asked him to approach Radha and color her face in any color he wanted, to show his love for her.

This he does, and Radha and Krishna became a couple, which to this day the Hindu’s venerate as the most romantic couple ever.

Ever since, the playful coloring of Radha’s face has been commemorated as Holi. “

When our city decided to celebrate the Festival of Colors, it was only natural to be there as part of the celebration, today. It was a beautiful warm Spring day, the rains that drenched our city until yesterday, had suddenly stopped, a perfect day for the Festival of Colors. The parking lot was full already by the time we arrived at the site, seemed like everyone in town was there, to be part of the celebrations of light,  love and colors.

People were slowly making their way to the Grand Pavilion, where the festivities was held……

….as we got closer, it suddenly burst into an array of colors of people, food and frolic, music and dance.

Food is an essential part of all festivals Indian, so we were greeted with yummy vegetarian food choices and sweet dishes to choose from.

The food lines were long, yet the weather was pleasant and the mood, light and fun, no one really minded the lines , we were so busy enlightening the one’s who were new to Indian food about the ingredients used and the health benefits.

The  food scene  was colorful and delicious .There was a general air of breathing out in the open, a mass sigh of relief was palpable after being in hibernation mode all winter.

There were stalls set up along the sides, educating interested ones on yoga , meditation, the Hindu way of life, the vibrant colors of India & their attire, the accessories that go with them etc.

Suddenly, it felt like we were in India, laughter, loud voices, babies that did not know how to stop crying, children running around. It’s beautiful to be able to learn and relate to each other’s culture, we are all enriched by the experiences, we share.

Some of them had brought their furry friends too, can’t really say if they joined in the celebrations, but they did not seem to mind one way or another.

Love is all there is. We are made of all colors bright and vibrant, and it takes all colors to make the rainbow.

After a beautiful day spent outdoors, we returned home with hearts filled  with color and joy.

Home is where the heart is !