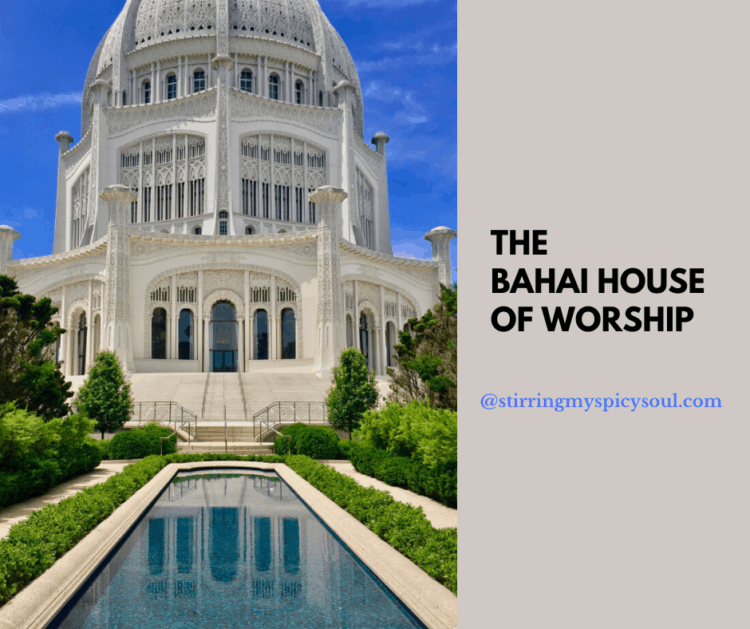 Driving through the downtown traffic on a beautiful sunny day, we reached Evanston, a city in Cook County, 12 miles north of downtown Chicago.The village of Wilmette, where the Bahai house of Worship is situated, is a 10 minute drive from there, through a beautiful neighborhood along the Lake Michigan.

Nothing could  have prepared us for this hidden gem, when it suddenly sprang on us like a page from a dream against the blue sky. It felt like we were in another world in the middle of Evanston, especially after driving through the crazy traffic of downtown Chicago. The peace and calm of this place envelops you in a state of tranquility for the rest of your visit there.

The Bahai House of Worship

The Bahai House of Worship in Wilmette, Illinois is one of the only eight Bahai temples in the world at present, this unique structure stands to represent unity and invitation to prayer to  the Almighty.

All Bahá’í temples share  certain architectural elements, some of which are specified by Bahá’í scripture.

While each temple has its own distinctive design, they all confirm to a consistent theme, an area of gardens encircles a nine- sided structure covered by a single, majestic dome (symbolizing the unity of all people and religions under God).

Abdu’l-Bahá stipulated that an essential architectural character of a House of Worship be that it requires to have a nine-sided circular shape (Nonagon).

“The cornerstone for the Bahá’í House of Worship in Wilmette, Illinois was brought to the site by Nettie Tobin and accepted in 1912 by ‘Abdu’l-Bahá during his only visit to the United States and Canada. Construction began in 1921 and was completed in 1953, with a delay of several years during the Great Depression and World War II.

“The House of Worship in Wilmette was dedicated in 1953 after more than 30 years of construction.

French Canadian architect Louis Bourgeois labored for eight years to arrive at an appropriate design for such a lofty purpose.

Hundreds of precisely sized and fitted sections were hung on the temple’s steel superstructure.

The cladding is made of white Portland cement concrete with both clear and white quartz aggregate. It has received numerous design awards, and is a prominent Chicago-area landmark. In 1978, it was added to the National Register of Historic Places.

The House of Worship is listed in the United States Register of Historic Places and has been designated as one of the Seven Wonders of Illinois.

It is miraculous to think that this is one of seven Baha’i structures in the world, and the only one in North America.

While all current Bahá’í Houses of Worship have a dome, they are not regarded as an essential part of their architecture.

As above, so below

While each of the Houses of Worship is unique, the designs, through the selection of materials, landscaping and architecture, reflect the indigenous cultural, social and environmental elements of their location, to a greater or lesser degree.

The Writing at each entrance

“Thy heart is My home ; sanctify it for My descent “ ~ writings of Baha u ‘llah integrated into the entrances.

“In the tracery of the towers are intertwined all the religious symbols of the past, demonstrating to each beholder of any religion. Welcome to this temple exemplifying universal brotherhood ” ~ Louis Borgeois

“The Bahai faith is an independent world religion practiced throughout the world by more than 5 million people of nearly every nationality and ethnic background.

They are attracted to the faith by the belief that we all belong to one human race, that all religions share a common source and aim, and the long awaited era of peace promised by God  in the world’s scared scriptures is now within reach.” read the information brochure, at the front desk.

The Bahai Faith was founded in Persia (now Iran) by Mirza Husayn -Ali (1817-1892), known as Baha u’ laah. His mission was to promote world peace.

The Bahai Faith has grown steadily in North America since it was introduced at the World Parliament of Religions in Chicago in 1893.

Today there are more than 155,00 Bahai’s in the United States, they live in every state of the union, including more than 100 Indian reservations. The largest Bahai populations are in California, Georgia, Illinois,South Carolina and Texas.

The Bahai faith has no clergy , rather its affairs are administered by elected councils at the local, national and international levels. The U.S Bahai National Center is located in Evanston,Illinois.

The faith is one of unity and inclusion. It is an amazing oasis of spirituality!!

The Core Principles of Bahai Faith

Some of the Core Principles of this faith included:

The beautiful visitor’s center at the entrance to the temple, held all the information about this temple, a faith, I had not a clue about before I visited this place. We were so glad we visited this beautiful and tranquil place. The temple feels very peaceful and is full of light and beauty.

Bahá’í literature directs that a House of Worship should be built in each city and town, and emphasizes that its doors must be open to all regardless of religion, or any other distinction.

We walked towards the temple from the visitors center situated in the front  of the temple and were immediately greeted by a group of Buddhist monks posing for a picture , right in front of the temple, affirming  my faith in their teachings that read, under God, we are all one humanity.

The Bahá’í laws emphasize that the spirit of the House of Worship must be a gathering place where people of all religions may worship God without denominational restrictions.

You can’t deny that some of the principles articulated in Bahai’i beliefs are commendable – “unity of religion,” or the idea that people should not be divided by the manifestation of God they choose to believe in, and “unity of humanity,” emphasizing the importance of looking past our differences and recognizing that the unification of humanity is the paramount issue in the religious and political conditions of the present world.

The Bahá’í laws also stipulate that only the holy scriptures of the Bahá’í Faith and other religions can be read or chanted inside in any language; while readings and prayers may be set to music by choirs, no musical instruments may be played inside.

Bahá’í scripture also states that no pictures, statues or images may be displayed within the House of Worship and no pulpits or altars incorporated as an architectural feature (readers may stand behind simple portable lecture stands).

To date all the Houses of Worship built or planned have a single, undivided room under their dome.

Furthermore, in all seven, the seats in the auditorium face the Shrine of Bahá’u’lláh in ‘Akká, Israel. No sermons may be delivered, and no ritualistic ceremonies practiced.

The height of the auditorium is 138 feet (42 m), and the diameter of the dome is 90 feet (27.5 m). The auditorium seats 1,192 visitors. Like some other Bahá’í temples, it has a gallery balcony from which choirs or soloists may perform.

There is no “religious” coercions here – just a spiritual up-liftment.

“Set your faces towards unity, and let the radiance of its light shine upon you” ~ Baha u’llah

The symbol at the top of the dome is an arrangement of the Arabic words, a prayer or invocation meaning, “O glory of the all Glorious”.

The Bahá’í House of Worship is a place of worship for all people. The only decorative art inside and out involves shapes and designs made by intersecting lines. There are no images of people or places.

The building itself is decorated inside and out with verses from the Baha’i Writings, all of them by Bahá’u’lláh.

Gardens surround the building, as well as fountains and tree lined paths – all meant to promote meditation and reflection, and appreciation of the value of beauty.

There is ample space to reflect, meditate, or share a picnic like we did.The next time you are there make sure to bring along some snacks so you get to gaze at the beauty of this temple, while seated under the trees beside the fountains and the fragrance of beautiful flowers.

This place is stunning, gorgeous, regal, breathtaking, grand, and the very best of all words……. elegant. Dare I say ,this building welcomed me with grace?

Bahá’í literature also stipulates that the Houses of Worship be surrounded by a complex of humanitarian, educational, and charitable institutions such as schools, hospitals, homes for the elderly, universities, hostels, and other social and humanitarian institutions to serve the areas in which they stand.

The process of community building initiated by Bahai’s  in neighborhoods and towns worldwide aims to raise individual and collective capacity to take charge of a community’s spiritual, social and intellectual development. These activities are open to everyone, there is no requirement to be a member of the Bahai community to fully participate

There are currently eight Bahá’í Houses of Worship :

8.Being built in Santiago, Chile

It is important to mention here that I was completely ignorant of the faith when I entered the Bahai  House of Worship, returned home enlightened with  knowledge about the Bahai Faith and it’s values on unity among people of all faiths.

Grateful for the knowledge and a deep appreciation of the beauty and peace of this tranquil place amidst a very happening city in the Midwest.

If you are looking for places to visit in and around the city of Chicago, during warmer weather, this is a place you want to definitely visit, since it is breathtakingly beautiful.

Irrespective of which faith you belong to, this Bahai House of Worship, place welcomes you with open arms and you come back home feeling peaceful for having visited this architectural wonder.

Make sure to leave a comment below if you enjoyed this post. Would love to hear about some of your favorite weekend drives, around where you live,

Resources for this post : From the Bahai House of Faith Information Center, Wikipedia and other sources from the net.

I’m really enjoying the design and layout of your
site. It’s a very easy on the eyes which makes it much more pleasant for me to come here and visit more often. Did you hire out a designer to create your theme?