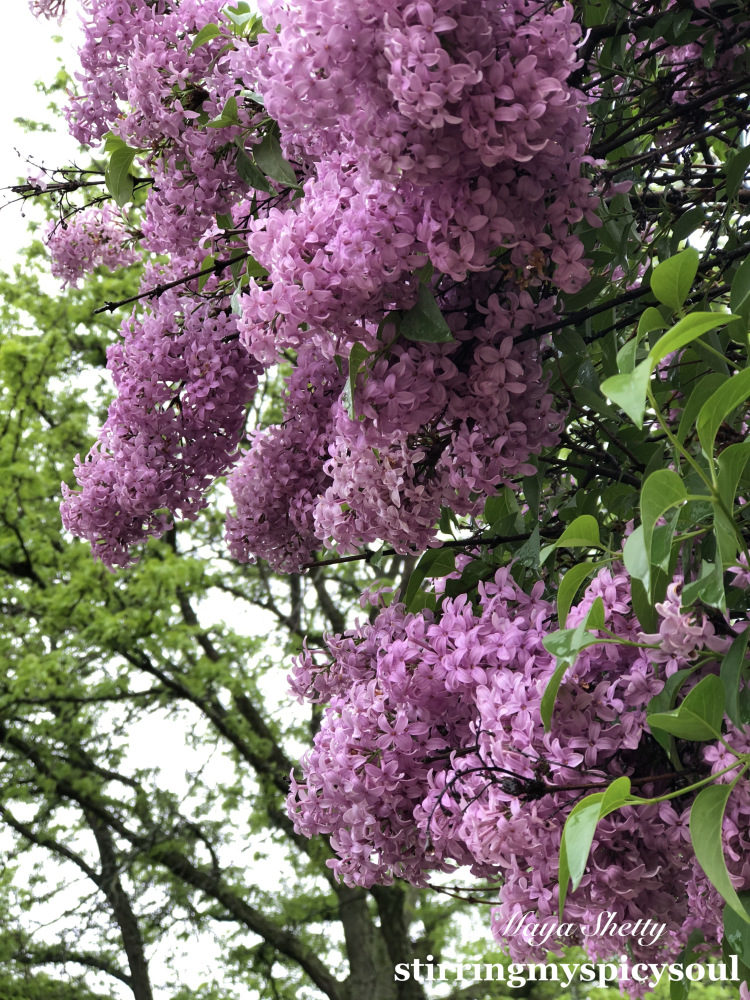 Is there anything more beautiful than a Lilac bush in Spring ?

Lilac (Syringa) plants are mainly grown for their beautiful blooms and their intense fragrance. With its sweet scent, pastel blooms, and heart-shape leaves, lilac stands out as a welcome harbinger of spring. The spring-blooming lilac comes in a variety of shapes and sizes—including dwarf shrubs, the midsize common lilac, and large trees with showy bark. Consider planting multiple types of lilacs with a variety of bloom times and colors to enjoy weeks of attractive flowers and fragrances.

The common lilac (with which most people associate the fragrance) comes from the species Syringa vulgaris. Native to Europe, this deciduous shrub was brought to the United States by colonists who could not imagine living without the plant’s pleasing scent. The common lilac reaches 8 to 12 feet high and 6 to 10 feet wide, with dark green leaves, purple flowers, and brownish-gray to gray bark. Because of its hardiness, this type of lilac works well as a single specimen planting or en masse as screens, hedges, or shrub borders.

The hundreds of cultivars boast a wide range of floral colors that include purple, blue-purple, lavender, magenta, reddish purple, pink, and white.Their color range from pink to purple and at times you do find the rare white and yellowLilacs too. One can find both tall and dwarf varieties of Lilacs , since they are easy to grow, they are seen in gardens to last for decades.They bloom mostly from mid to late Spring, some varieties like Bloomerang  extends the season with repeat bloom in late summer to fall. Dwarf Korean lilac, ‘Miss Kim’ lilac, and ‘George Eastman’ lilac all remain under 10 feet tall. Some newer cultivars are less prone to powdery mildew, lilac’s biggest imperfection.

Dwarf lilac varieties are smaller in scale than the common lilac but offer similar flower colors and scents. These shrubs reach 4 to 6 feet in height, which makes them suitable plants for small gardens and even containers. With their compact branching, the dwarf plants can be trained as hedges and topiaries. Their tighter growth habit requires less time and maintenance than the common lilac. The Meyer lilac, or dwarf Korean lilac, is one of the better known varieties. Four feet high and 5 feet wide, this little shrub produces dark violet flowers. Some varieties boast spectacular fall foliage in shades of orange, yellow, and burgundy.

Japanese tree lilac reaches 20 to 30 feet tall and 15 to 20 feet wide—proportions that make it a good choice for street plantings and hedges, or as a screen along property lines. This lilac produces fragrant creamy-white flowers that attract butterflies and hummingbirds in late spring to early summer, a little later than the shrub lilacs. It also boasts dark green leaves and showy reddish-brown bark that peels as the tree ages—an interesting visual to enjoy in winter.

For best results grow common, dwarf, or tree lilacs in full sun with well-drained, evenly moist soil. These plants withstand droughts well once they have been established. Common lilacs can adapt to part shade, but doing so will see fewer flowers produced in spring. Part shade also encourages powdery mildew, a frequent disease in lilacs. Counteract mildew by planting lilacs in full sun and pruning them regularly to increase airflow around the plants. Lilacs bloom on old wood, so prune them in the spring after the flower show is over for the season.

Many reblooming lilacs range in color from pale pink to magenta, which makes the lilac tone of Bloomerang a rarity—and extremely popular. The purple flower hue of these shrubs also darkens in color in summer and fall. Like other lilacs, the Bloomerang blooms are scented and make for good cut flowers in bouquets.

Reblooming, or remontant, lilacs were first noted in the early twentieth century; they are distinctive because they flower more than once per season.

Bloomerang lilac (Syringa ‘Penda’) was introduced in 2009 and has been a runaway success since then. Bloomerang, which is considered a dwarf flowering shrub, reaches a mature height and spread of 4-5 feet. Like many similar shrubs and bushes, it is hardy to Zone 3, although it tends to do better in cooler areas, such as those above Zone 7. Considered by many to be the most consistent and prolific re-blooming lilac, Bloomerang makes its initial heavy bloom in mid-May. In June the dwarf flowering shrub rests, then begins re-blooming in July, continuing until frost. The difference between the two blooming seasons is the size of the panicles: Those in summer and fall are not as large as those in spring. However, every single branch on this re-blooming lilac bears flowers. Bloomerang is a re-blooming lilac that’s upright, with fountain like, long branches that arch gracefully toward the ends. As long as it is growing, it is blooming.Unlike many lilacs, Bloomerang hasn’t shown much susceptibility to common diseases including powdery mildew, pseudomonas, and phytophthora.

An older variety of reblooming lilac, Josee, has been popular with gardeners who wanted to enjoy the sights and scent of a lilac in summer. It was hybridized in France in the 1970s. Josee is believed to be one of the parents of Bloomerang lilac.

There are two approaches for integrating companion plants, shrubs, and bushes with this reblooming lilac. First, pair it with perennials and shrubs that bloom along with the lilac flowers in early spring, like bleeding heart, Solomon’s seal, Siberian iris, catmint, and azalea. Or, you can pair this reblooming lilac with shrubs and plants that flower when Bloomerang lilac is taking its early to midsummer rest, such as day lilies, Asiatic lilies, and purple coneflower, as well as phlox, which spans the season. Good late-summer- and fall-flowering companions include evening primrose, sedum, and mums.

Lilac flowers are an unique and beautiful addition to any recipe and serve as edible flowers in many recipes too.

Lilac Cake: Ever thought of decorating a cake with flowers? Lilacs bloom right around Mother’s Day so they’ll be the perfect topper. (via Twigg Studios)

Lilac Petites Fours: This dainty recipe might just inspire you to plan a full fledge spring tea party for all your lady friends. (via Ricardo Cuisine)

Lilac Lemon Fizz Mocktail: Spring is the time to break out all those lemonade recipes. Shake up this mocktail for your next dinner party and your guests will be thanking you. (via The Merrythought)

1. Lilacs only flower for about three weeks in the spring, but some varieties, like the Josee or the Boomerang, will bloom several times during the year.

2.Some varieties of lilac bushes can survive temperatures down to -60°F.

3.Want a big lilac bush? Prune them less often. (But make sure to trim them at least once a year!)

5. There are more than 1,000 varieties of lilac bushes and trees.

6.The flowers are edible and taste great in cocktails.

7.In the language of flowers, purple lilacs are the symbol of first love.

8.The New Hampshire state flower is the lilac.

9.The tree lilac, Syringa Reticulata, can grow to 25 feet tall.

10.Want to stop and smell the flowers? Purple lilacs are most fragrant on a sunny, warm day.

Check the below links for my blogposts on Spring Blooms this season…..

Note : Kindly note, pictures and info taken from the net for information purpose only, unless specifically marked by blog name, so that those of us who are interested in knowing more about these Spring Blooms may learn and grow.