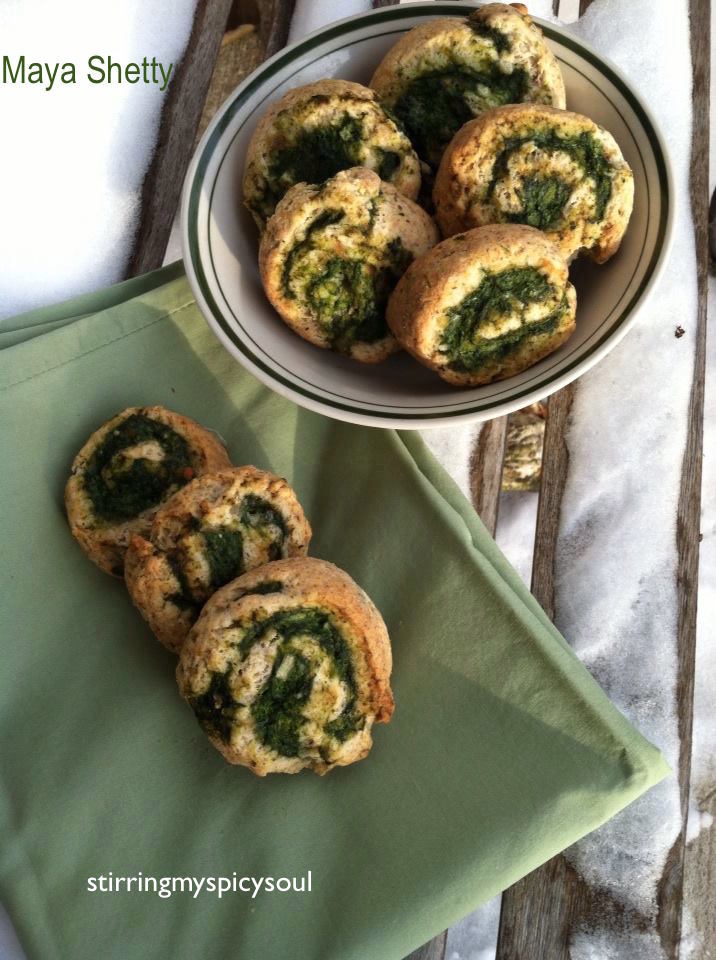 It’s the season for Christmas carols. “The weather outside is frightful, but the fire is so delightful….so let it snow, let it snow, let it snow”……and so it did. A friend of ours had invited us for a potluck dinner at her place, later this evening. I fiddled with many a dish idea to take for potluck. Suddenly the thought of making these Spinach and cheesy chicken pinwheels crossed my mind .I had long been postponing wanting to try making this holiday dish. I set about my baking while in the background the carols drawled on, on TV. It has been snowing like it would go out of fashion, this whole week,  cold, wet and windy outside. The warmth of the fireplace at home was enough to keep the holiday cheer on. Baking was in full swing. There is nothing as heartening as the smell of warm spicy baked goodies indoors, on a cold wintery day.

Enjoy, your pinwheels, indoors or outdoors on the garden bench & watch the snow gently fall & wrap the earth in its magic. or like I did take them to a potluck party. These tempting appetizers look like they’re difficult to make, but they’re not. They contain spinach, onion and cheese filling simply rolled up in flaky puff pastry and sliced into pinwheels.These little holiday treats are sufficient as an appetizer for parties. They can also be  wrapped warm as a lunch treat with all the yummy ingredients rolled into a swirl.

The links to my previously published Spinach recipes are attached below for your interest.