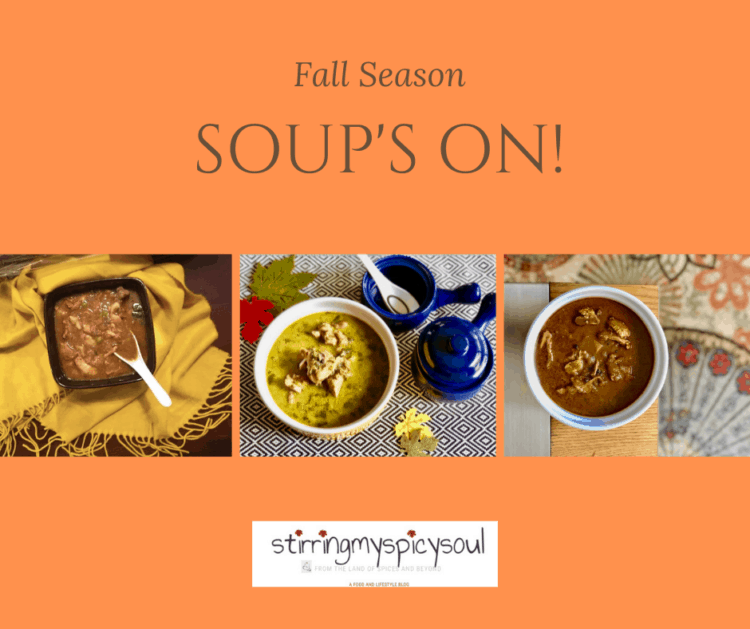 It’s soup season, y’all! How do you keep yourself warm during the colder months? Agreed, there are plenty of ways – warm sweaters, knitted blankets and sitting around bonfires, right? But do you know what is the coziest way to stay warm? Turning a pot of delicious soup on the stove and letting it simmer unattended until it is time to eat.

The harvest season provides us with a myriad of choices in seasonal produce, that can go right into these soups and Voila! with some toasted bread and a quick salad dinner is ready.Not to mention, there’s really nothing like curling up on your couch with a hot bowl of brothy goodness, whether it includes pumpkins, squash or chicken, it just tastes as good.

Soup is the easiest thing to cook with just a handful of ingredients.Read on to find more about Soups, the different ways to make them, how to drink them and so on.Let the flavors of the season tickle your taste buds.You can also break out your slow cooker or Instant Pot for some of these recipes, making for  easy dinner options.

According to Merriam Webster’s Dictionary, the definition of a soup is a liquid food especially with a meat, fish, or vegetable stock as a base and often containing pieces of solid food.

What are the different types of soups?

There are two basic kinds of soup—clear and thick.

Clear soups include flavored stocks, broths, and consommés, and include soups such as chicken noodle soup and French onion soup. Stock or broth is the basic ingredient in clear soups.

Thick soups include cream and purée soups, such as bisques or cream of tomato soup.

Is soup the same as stew? What is the difference between them?

Generally, stews have less liquid than soups, are much thicker and require longer cooking over low heat. While soups are almost always served in a bowl, stews may be thick enough to be served on a plate with the gravy as a sauce over the solid ingredients.

Download our FREE Printable,The Ultimate Soup Guide when you sign up to receive our weekly newsletters today.

Why is Fall/Autumn considered the soup season?

While it pains us to bid farewell to summer backyard bashes and barbecue parties, Fall is already upon us. It’s time for our favorite fall festivities: football, wardrobe updates and autumn eats. We are definitely starting to develop a hankering for those Fall comfort foods as the weather starts to cool down.

During the harvest season, we have access to a myriad of brightly colored fruits and vegetables.These autumn bounty of produce bear the color, richness & flavor of the Fall. Creating meals with them will warm up our insides and keep us satisfied for the long haul.

There are plenty of ways to keep warm during the Fall season—sweaters, blankets, and bonfires, to name a few. However, making a few fall soups is definitely the most delicious way to get cozy.

Fall/Autumn is the soup season! There’s no better time to enjoy these hearty recipes than fall. There is really nothing like curling up on your couch with a hot bowl of brothy goodness and savoring the richness of the harvest in your Fall soups.

Do you drink or eat soup ?

If you’re using a spoon and scooping it out of a bowl, I would go with ‘eat’.’The thicker chunky soups with vegetables or meat, like the Indian chicken soups would fall into the eating soup category.

If you’re picking up the bowl and putting your mouth on it to get at that soup, that’s ‘drinking ‘,The clear thin soups like the Indian rasam would fall into the drinking soup category.

Soup can be served in a wide, shallow soup plate or a deeper soup bowl. If you’re eating from the former, the spoon should be rested in the soup plate in between bites and when you are finished eating. If it is the latter, always rest the spoon on the plate below the bowl, not in the bowl itself. If the soup is served in a cup with handles, it is appropriate to lift the cup up and sip from it directly, but use your spoon to eat any solid ingredients like vegetables or noodles.

A list of soups for you to pick from

Ahead, you’ll find soups that utilize all the best flavors of Fall. You’re bound to encounter a few fall soups that speak to your taste buds. And not only can you get creative with what you put in each recipe, but you can also break out your slow cooker or Instant Pot for some of these recipes, making for easy dinner options too.

Enjoy the soup season, trying out the delicious and comforting soup recipes found here.Do leave a comment on how it turned out for you. There is more coming in this soup season, watch out for this space.

I have only recently become a fan of soup. I much prefer homemade to what comes in the can at the grocery store.

Absolutely! Nothing to beat homemade soups, for sure.

I love a thick and creamy soup. I will definitely have to try one of those recipes. This time of year is perfect for soup!

Thank you. Yes, indeed! It is soup season, nothing like a bowl of hot soup by the fire,for comfort this season.

Soup is so soothing and relaxing during Autumn and Fall! We do love soup almost all year as well!

Yup, soup is always a delight.Thin watery ones for spring & summer, thick and creamy ones for Fall & winter is a perfect choice when it comes to soups throughout the year.

I love soup any time of year but especially during fall and winter! I look forward to trying some of these.

Thank you, would love to hear your feedback when you try some of our soup recipes.Absolutely agree, that soups can be had any time of the year!

I am ready for soup!!! Especially with the cold rain we’ve been having

Have been trying newer soup recipes this past week & it sure is a hit at home.More soup recipes coming up soon in our blog. We have been having endless rains in the midwest too, nothing a bowl of hot soup can’t fix 😉

Soup is such a great way to warm up! Tomato bisques are my favorites!

I love making soup at this time of the year! I make it in big batches and freeze it so that it’s easy to warm up for lunches and meals! I will have to try some of these!

Thank you, would love to know how it turned out for you when you try our soup recipes.A perfect time for soup, indeed!

It’s definitely soup season! Even though I live in Southern California and the weather isn’t super cold in the fall, it cools down enough to make it soup weather in my opinion. And this week alone I’ve already made four soups! They are so easy to make ahead, especially when my kids have games and practices during times I’d usually cook dinner. Plus, soup tastes better when eaten the next day in my opinion. Soup season is my favorite season!

Totally agree with you, that soups are so easy to prepare & you can try so many different combos. This week at home, I tried a Mediterranean shrimp soup for the first time, it was a hit & hardly lasted the next day 😀 Bigger batch next time, for sure. Lucky you, in Southern Cal, here in the midwest we have been having torrential rains & temps in the low 40’s, needless to say we dig into soups like it will go out of the menu 😀 Enjoy!

I love the idea of slow cooker soup!

Yup, just the right amount of creamy, hot, rich deliciousness when you come back home after a long day at work.

Wednesdays in the fall, we alternate who is bringing in the new cool soup recipe to share at lunch time in my office. Soup Wednesday! I can’t wait to try one of these!

How fun! Should try the soup Wednesday on our end here too 🙂 Thank you, do try our soup recipe & share your feedback, they are tried & tested in my kitchen & are sure to be a crowd pleasing one without a doubt!

We love soup in our house… stews too. From October to about April, we usually have at least one soup for dinner every week. We need to expand our repetoire though! LOL

LOL! Now you don’t have an excuse of running out of ideas 😀 You can pick any of our recipes and flaunt it on the table & be assured they will asking for more.Nothing to beat home made soups. Give ours a try!

Soups and stews are my favorite things to eat in the world; I often order soup when dining out. I love your discussion of the proper way to eat or drink soup. In general, I eat the chunks with a spoon, then drink the broth.
Yum! Now I’m hungry!!
BTW, thank you for publishing the kibbe recipe; makes me nostalgic.

You are most welcome, so happy to hear that. Yup, table etiquette when it comes to soups is important to understand coz there are so many kinds of soups & eating/drinking them up can be quite tricky. Glad to know that our blogpost spoke to you. Do try our soup recipes and share your feedback, would love to know how it turned out for you.

These are great ideas for why soup in the autumn is perfect!