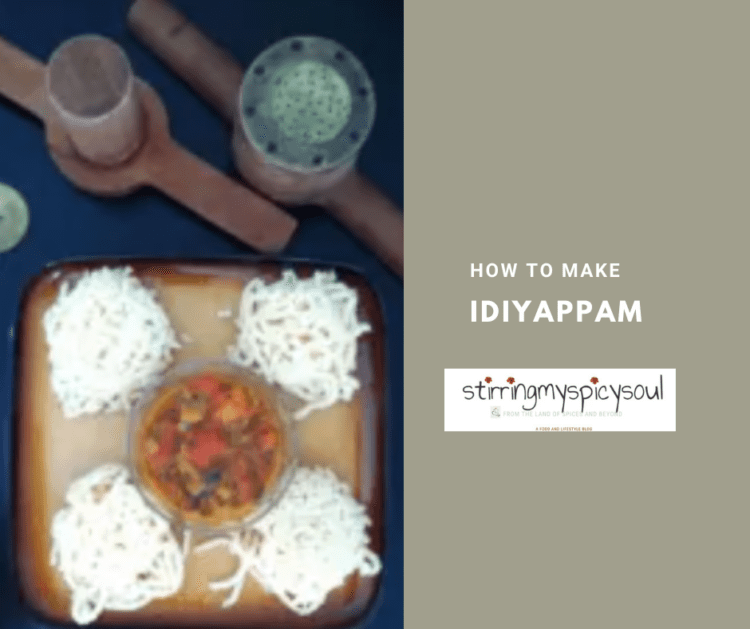 There are some traditional breakfast food items specific to South India, and “Idiyappam” or rice flour pressed into noodle form and then steamed, is one of them.In some of the southern states they have it for breakfast with some spicy curry,in some others they have it as a whole- some dessert with sweetened coconut milk & jaggery, either way it’s a great favorite of mine. After several futile attempts with rice powder ( in spite of being well equipped with traditional accessories) I had almost given up on the idea of making them again, until this morning I saw this recipe posted by a friend who had used Rava/Sooji/Cream of wheat for recreating the same magic.Talk about Pavlo’s reflex, the drool factor kicked in as I saw the picture,so armed with the traditional kitchen tool ( the Idiyappam press) reciting a prayer, I set about to try yet another time….my joy knew no bounds as I saw the noodles seep out through the press…Yay! I did it, it worked.Believe me, that is the hardest part, as I squeezed the wooden handle, I had visions of both my Grand moms, blessing me from heaven for having made it. Those were golden days of childhood when you boarded the train to your Grand mom’s place dreaming of all the yummy food you were going to get fed throughout your summer holidays.This was made in a larger press then, for a large scale crowd at my Grand mom’s and all we had to do as children was fill our little tummies with as many as we could & burn it off playing outdoors….no thoughts on how it was made from scratch ever existed in my little brain then! This morning, as I pressed the wooden handle to squeeze the noodle out, Man! does it require force, all I could think of was my Professor’s words in Dental school giving us a demo on tooth extraction, his words rang in my ears ” The force has to start from the hip joint, with your feet firmly placed on the ground” and so I did, sliding this way & that on the kitchen floor, by the time I was done with 12 of these, I was thankful I had no grandchildren yet, wonder how my grand mom’s handled a house full of them on summer breaks & not one ate less than the other smile emoticon My kid walked into the kitchen after waking up, he gave me one look and said “Amma are you practicing Taek won do?” my face was red trying to get the noodle out of the press ( coz’ , remember it becomes harder to press as it cools down !)….Oh, for the love of the child, I said & smiled.Finally, breakfast was done & it was a success…worth the effort. “That “Idiyappam” press had survived my generation, now its on to you ” I said to my kid & went on to do my daily chores.