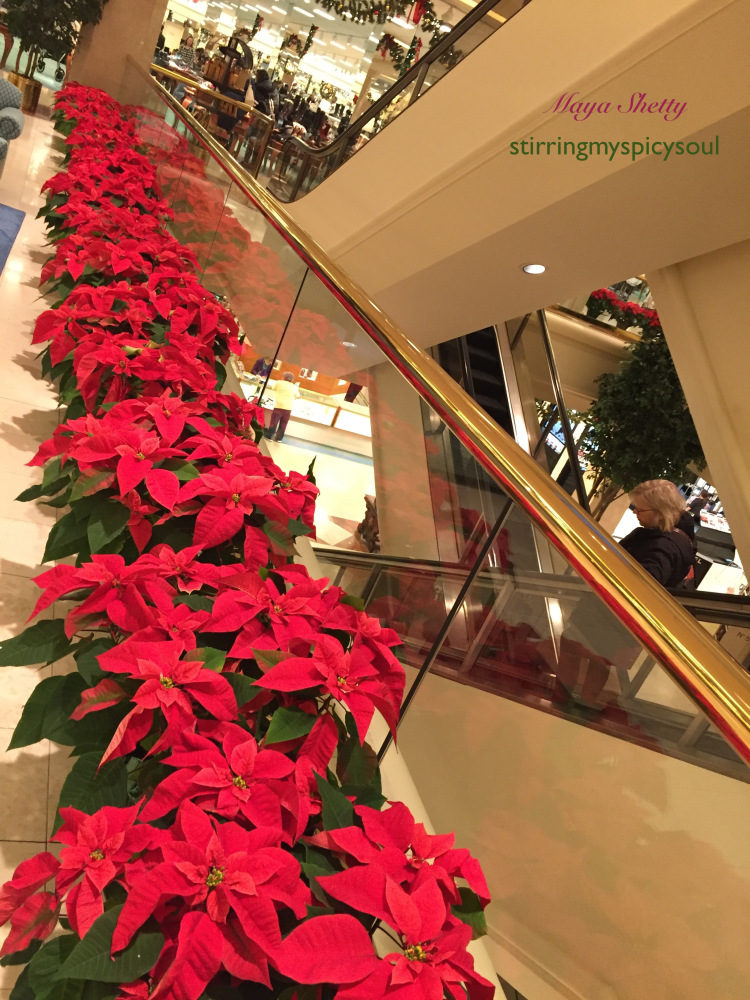 The holiday season is here,you can’t miss it, the Poinsettias line every store in the mall.What is it about this plant that makes your heart jump with joy, every time you spot one ? Is it b’coz they signify joy, is it b’coz they signify that the holidays are here or is it their happy cheerful bright red and green leaves.People mistake the brightly colored  red leaves for the petals of a flower, the truth is it is a leaf that has transformed itself to a brighter color , through a process known as photoperiodism.

“The colored “bracts”/modified or specialized leaves—which are most often flaming red but can be orange, pale green, cream, pink, white, or marbled—are often mistaken for flower petals because of their groupings and colors, but are actually leaves. The colors of the bracts are created through photoperiodism, meaning that they require darkness (12 hours at a time for at least five days in a row) to change color. At the same time, the plants require abundant light during the day for the brightest color”.(Source: Wikipedia )

The poinsettia, Euphorbia pulcherrima Wild, is a tropical plant indigenous to Mesoamerica and tropical Mexico. It was cultivated by the Aztecs of Mexico, in the area near present-day Taxco, long before Christianity came to the Western Hemisphere. The brilliant ‘flower’ was beloved by natives and their kings as a symbol of purity . The flower was also processed by the Aztecs to make dye and the latex was used for a medicine against fever. Because poinsettias typically bloom during the Christmas holiday season, a group of Franciscan priests who were settled near Taxco in the 17th century began to use the brilliant flowers in the Fiesta of Santa Pesebre, a nativity procession. This is the first known incidence of poinsettias being used for holiday celebrations.

Poinsettias were first introduced into the United States in 1825 by Joel Robert Poinsette while he served as the first U. S. Ambassador to Mexico. Poinsette, a renowned botanist, had several plants sent to his home in Greenville, South Carolina, which he later distributed to various botanical gardens and his horticultural friends . Robert Buist, a nurseryman, first sold the plant as Euphorbia pulcherrima. However, the name poinsettia has become the accepted name in English speaking countries. Today, poinsettias are one of the most important floricultural crops in the United States. Total U.S. poinsettia production was valued at $325 million in 1997 .( Source: apsnet.org)

What’s In A Name?

There is an old Mexican legend about how Poinsettias and Christmas come together, it goes like this:

There was once a poor Mexican girl called Pepita who had no present to give the the baby Jesus at the Christmas Eve Services. As Pepita walked to the chapel, sadly, her cousin Pedro tried to cheer her up.
‘Pepita’, he said “I’m sure that even the smallest gift, given by someone who loves him will make Jesus Happy.”

Pepita didn’t know what she could give, so she picked a small handful of weeds from the roadside and made them into  a small bouquet. She felt embarrassed because she could only give this small present to Jesus. As she walked through the chapel to the altar, she remembered what Pedro had said. She began to feel better, knelt down and put the bouquet at the bottom of the nativity scene. Suddenly, the bouquet of weeds burst into bright red flowers, and everyone who saw them were sure they had seen a miracle. From that day on, the bright red flowers were known as the ‘Flores de Noche Buena’, or ‘Flowers of the Holy Night’.

The shape of the poinsettia flower and leaves are sometimes thought as a symbol of the Star of Bethlehem which led the Wise Men to Jesus. The red colored leaves symbolize the blood of Christ. The white leaves represent his purity.

In this festive season, may our homes and hearts be blessed with Grace, what the beautiful Poinsettia signifies in all its glory