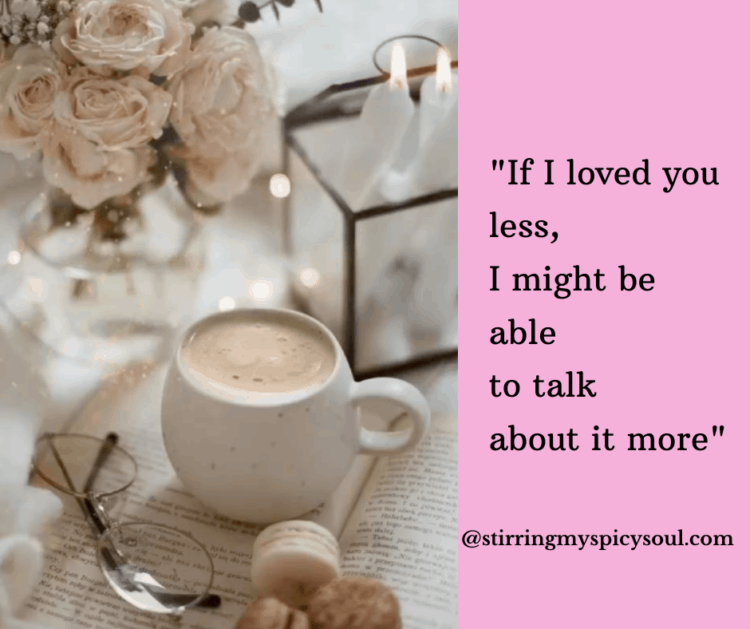 Love, it’s many a splendored thing. What better way to celebrate this month of love than by quoting authors , who spoke so eloquently about the matters of the heart. When words fail, check with the authors and poets, will you ?

If I loved you less, I might be able to talk about it more ~ Jane Austen in her novel, Emma

There are wordsmiths that painted our imagination in the lines they wrote, in our growing up years. Jane Austen, was one of them for me. Is there a better way to celebrate “this month of love” then by celebrating  some of the best things ever said about love ?

Jane Austen, was an English novelist known primarily for her six major novels, which interpret, critique and comment upon the British landed gentry at the end of the 18th century. Austen’s plots often explore the dependence of women on marriage in the pursuit of favorable social standing and economic security.

Her works critique the novels of sensibility of the second half of the 18th century and are part of the transition to 19th-century literary realism. Her use of biting irony, along with her realism, humor, and social commentary, have long earned her acclaim among critics, scholars, and popular audiences alike.

Jane Austen’s six major novels are listed below, for your interest. If you haven’t read them, may I suggest you do when you find time if you enjoy brilliant writing. A perfect collection for winter reading by the fireside.

If you know someone who enjoys good reading or watching some classics, these works of Jane Austen might be a good idea for a Valentine gift. Did I date myself, by saying so ? Not really 😀 Classics will always be classics ( if you know the difference!) , the rest a passing fad 🙂