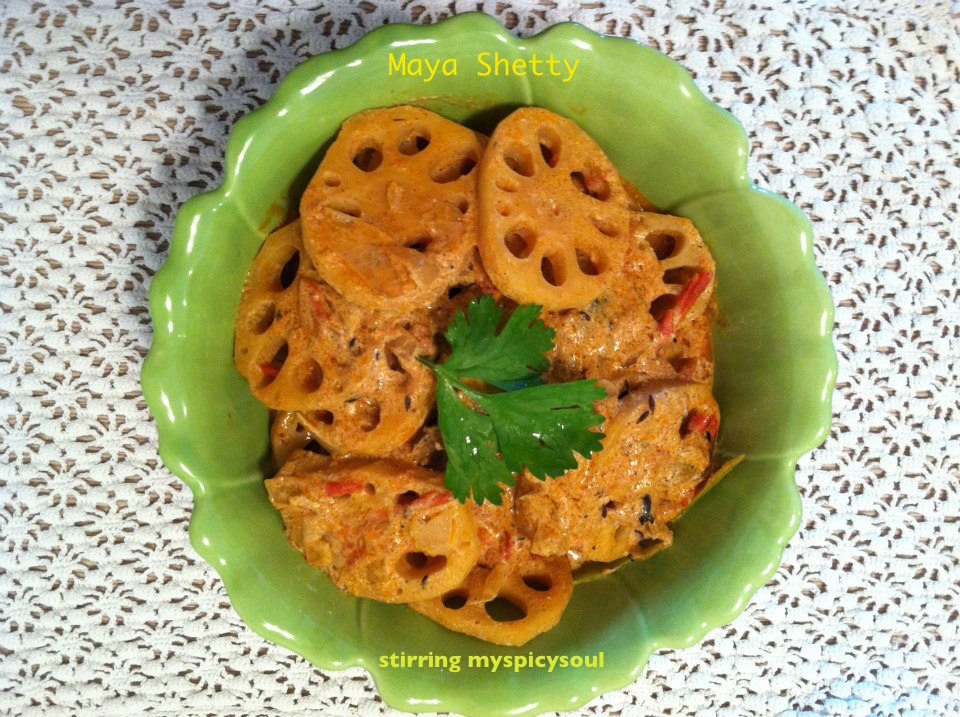 LOTUS STEM CURRY/KAMAL KAKDI/BHEIN MIRCH MASALA
The exquisite beauty of the Lotus flower is well known in India as well as among the Orient.It is held in high regard for its medicinal properties among the Orient and hence regarded as a plant that represents longevity.Its the only plant that grows in all the three elements of nature, namely the earth(mud), the water & air,perhaps why it has a healing quality on the body & mind.Apart from taking a garland of Lotus flowers to my favorite diety, Annapoorneshwari in the temple & admiring them growing so beautifully in little ponds along my train journey to Mangalore, I never really knew much about this plant itself.Last week when I ventured into the Korean market here,in one of my adventurous cuisine trips,my radar caught this beautifully shaped pack which on closer look read “lotus Stem”…never seen or heard about this before,yet was willing to try creating some new recipe with it, since they looked so inviting.On doing a little research on the lotus stem,came across a lot of information both on health benefits & the varoius ways it is cooked around the world.Being an Indian at heart always, would only mean my first experiment with this lotus stem would have a flavour from my motherland,perhaps in future would try other cusines too,roots run deeper!Surprisingly I found that the most used recipes with the lotus stem was from the Kashmiri Pundits & Sindhi’s, it was not so popular in South India,perhaps why I had not tasted it earlier.
The” wheel shaped” lotus stem seen in the picture is the cross section one gets when cutting or slicing the long stem into required size pieces.Since the architecture itself resembles the lungs ,this has a high medicinal value in curing any respiratory ailments.When taken along with ginger gratings, the juice of the lotus stem relieves many respiratory inflammations.When made into a paste & applied as a pack on the face, it relieves congestion,thus helping melt mucus accumulation.It is also considered to be very effective as a macrobiotic remedy in stomach & intestinal troubles.The seeds of the lotus flower are used by the Orient to increase vitality & energy & to aid in digestion in Oriental medicine.It is known to neautralise toxins in the body.
Lotus stems also are rich in dietary fiber , essential vitamins and are low in saturated fat.It is usually cooked with rice vinegar or “ume su”/umeboshi vinegar and is commonly called “renkon” among the Japanese.Its widely used among Chinese, Japanese,Thai & some North Indian cuisine.Its mild flavor combines well with most vegetables and its crunchy texture is appealing in stir fry dishes & simmered ones.This is the first time, I tried a recipe with Lotus stem & it sure did turn out good.It goes well with Chappathis or rice,since it is a simmered dish.Enjoy.