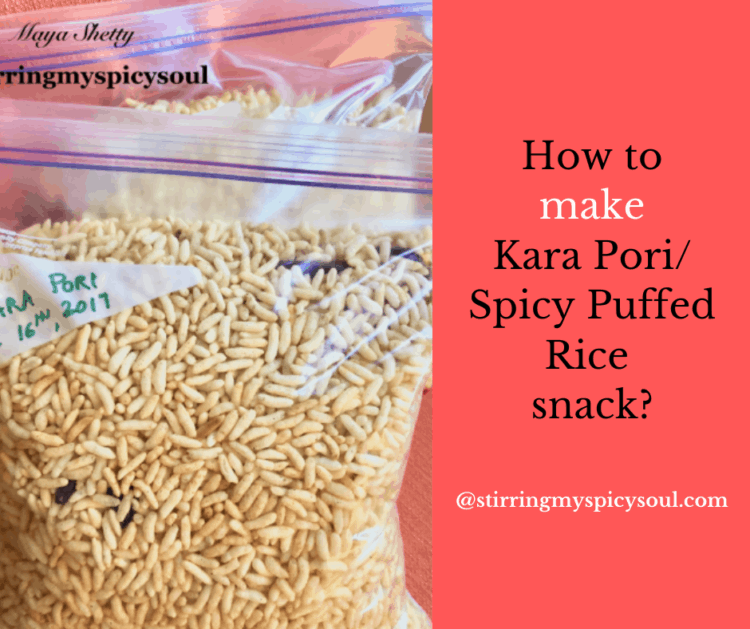 Kara Pori/Spicy puffed Rice Snack : A quick, easy and yummy spicy snack to go with your evening coffee. it is made crunchy & crips with addition of peanuts, curry leaves, roasted garlic. It is also called Masala Pori because of its spiciness. a must have or binge watching Tv or a cold winter weekend!

Grew up in a small town in South India, where Pori/Puffed Rice vendors were a common site either on their bicycles with their huge bag of light weight Pori/Puffed rice or in the little shops by the market that was meant exclusively for Pori vendors .It was open all through the year, yet got busy during the Saraswathi Puja festival as the Pori was used as a prasadam/offering to distribute to everyone  attending the puja/ prayers offered to the Almighty.

Those days it was a common practice to drop by  friends places in the evenings or have  family friends  drop by after work. Some laughter, an easy chit chat over a light snack and driving back home with a content heart was a given any time of the day.

Me thinks, that is the reason why we never knew about therapists back then, meeting friends and laughter was therapy !Kara Pori or Spicy Puffed Rice always took a prominent place during such visits, over a cup of coffee, with us sitting under the coconut palms while a gentle breeze blew, sharing a bowl of Kara Pori and life. Back then, life was made of simple beautiful things .

When homes were occupied by just the empty nester’s Kara Pori still had its bonding touch.The children flew out to school to different states and different cities tasting Pori in so many different forms ( Bhel Chaat was one favorite!) yet the traditional Kara pori magic could never be replaced.

How does Pori/Puffed Rice look?

Puffed rice, puff rice, rice puff ,Pori, Murmura refers to various foods made by introducing air into rice, typically in such a way that the grains of rice become larger and lighter, while also reducing moisture to achieve a crisp texture consistency.

Recreating magic in my kitchen

The cold wind was blowing hard , a light snow on the grass, trying to keep my chin up and not to let the winter gloom take over me, I searched my pantry high and low, to recreate magic in my small yet cozy kitchen.

I needed some snack ASAP, to keep the winter chill away and put my feet up and relax indoors on a weekend, binge watching Netflix shows that I had lined up for this holiday season. What could I make quickly, that fills that void in me I thought, as I rummaged through my pantry and found 2 packs of air sealed Pori, I had recently bought from the Desi store here .

Kara Pori was just what was on my mind today, so in less than 15 minutes made it, and put them in Ziploc bags for winter evenings in front of the TV.

Sitting in front of the TV watching some Indian movies with a bowl of Kara Pori drinking coffee is my definition of a perfect winter weekend indoors.

I can almost hear the laughter and feel the gentle breeze of the coconut palms in my soul. Home is a feeling, not a place. Make yourself some Kara Pori and recreate the magic, coz’ it’s the most wonderful time of the year.

What other time in the year can you sit with your PJ’s sipping coffee without the stress of the morning commute eating Kara Pori and  binge watching TV shows on Netflix , if not during the end of the year. When the weather outside is frightful, but the fire is so delightful…and since we have no place to go, let it snow, let it snow, let it snow!

Believe me , over a bowl of Kara Pori, you can make lifelong friendships. It somehow renders itself to open hearted conversations which are so lacking these days. Invest in friendships & Kara Pori, the therapists will have no role in our lives….if only we could talk to each other ? Willing to give it a try? Go on, try some today !