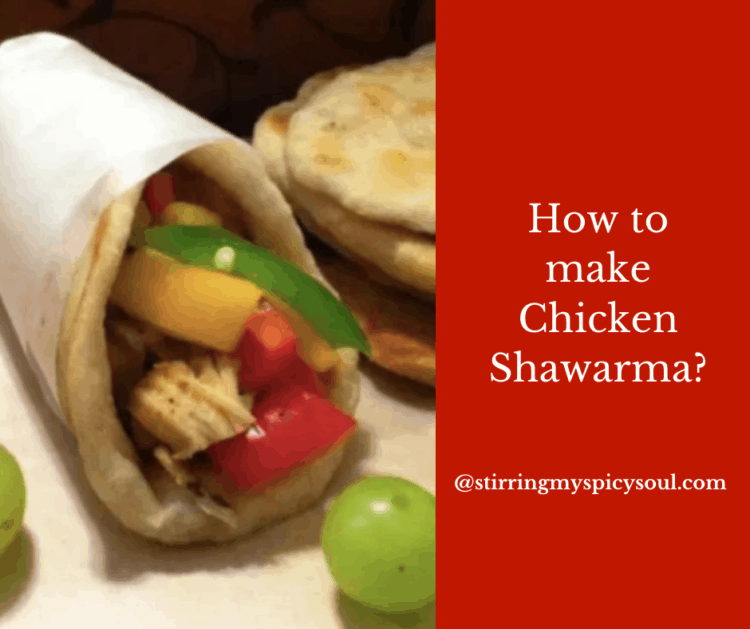 Shawarma is a dish in Middle Eastern cuisine consisting of meat cut into thin slices, stacked in a cone-like shape, and roasted on a slowly-turning vertical rotisserie or spit. Originally made of lamb or mutton, today’s shawarma may also be chicken, turkey, beef, or veal

How did Shawarma, get its name ?

Shawarma is believed to be the street food of the Middle East found in every Shouk corners,I’m told.It derives its musical sounding name from the Turkish word“Cevirme” which means to turn.

True to its name,Shawarma is an Arabic Pita bread, which holds layered meat which is cooked on a vertical spit with heat generated from the center cone which slowly rotates for a whole day.The professional Chef expertly runs a sharp knife in a rhythmic fashion up & down the spit shaving thin slices of meat which is then collected in the hot pita bread or wrap& tossed around with various crunchy veggies.It is generally accompanied by Tahini(sesame ) sauce or Hummus(spiced chickpea paste).

My experience with Middle Eastern food

The first time I heard “Shawarma”,I thought it was the long lost brother of the famous Indian artist Ravi Varma…..never realizing it was food.Venturing into new cuisnes, however adventurous, was not my cup of tea owing to my severe egg allergy. I often worried about not knowing the ingredients in a particular dish, so never tried new cuisines, I was not familiar with.

The first time, I was offered “baklava” by a colleague, I was surprised at how delicious it tasted. That was my first intro to Middle Eastern food, having never tasted it before. Slowly I ventured into finding out more about their food and their culture.I realize we use similar spices , both Indian & Middle Eastern food almost carry the same flavors & now I am a fan!

Venturing into Middle Eastern cuisine, I have learnt to make Pita bread, so this evening, I stuffed the pita bread I made with grilled chicken, crunchy vegetables & had a hearty meal with my loved ones. For starters my Chicken shawarma was a hit at home!

Some of the links to my recipes using Chapatis and Indian flat breads are listed below for your interest.