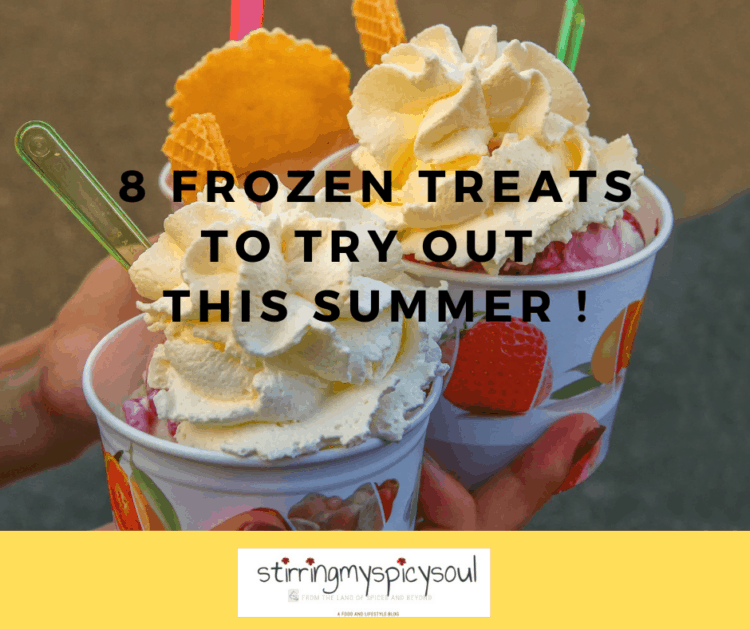 Keep cool all summer long with these homemade treats, straight from your freezer.

What comes to mind when someone says, “Let’s go get ourselves some frozen treats, it’s hot like hell!”

For some they might picture a sorbet, a few of you might go with sherbet, if you are like me then definitely Ice cream, while some of us might give it an Italian spin and ask for Gelato.

How about Frozen Yogurt, that sounds like fun or perhaps a creamier version of Frozen custard ?

An Ice Pop anyone ?

Well, well before you get all mixed up with what to choose from, let’s explain what each one means, so you get to pick your best choice to choose exactly what your need.

How different are they from each other?

Learn more about each one below.

Try out my Honeydew Sorbet, this summer.

Check out my Watermelon Mint Sherbet, sure to cool you down this summer.

You might also check out the following posts, if you are interested in knowing about the different frozen summer treats

Are you ready to roll? Which one of our frozen treats are you going to try this summer?

YUM! I’m a believer in treats!

Yasss to watermelon popsicles! That is one frozen treat I am binging this summer

A perfect summer treat to beat the heat!

Thank you. Now that you have the recipe, go on give it a try & let us know how you enjoyed it. You are welcome 😉

Thanks for telling us the difference between these different frozen treats. They all sound yummy.

You are most welcome. Enjoy!

What a great explanation of the many different frozen desserts.

Thank you, glad you enjoyed it!

Of course being Italian, I love the gelato and granitas the most! Since my dairy allergy restricts a lot of frozen treats, I take what I can get! LOL

Here in the Northeast USA, we’re in the middle of a heatwave. The watermelon popsicles would be so refreshing right now!

So many ways to use watermelon this summer, but popsicles definitely the best choice on the go 🙂

These look yummy. I can’t wait to try them.

This is really interesting! I knew they were different but had no idea what was behind the differences. Now I know!

Thank you, for sharing that. When our blogpost are appreciated for the content they deliver our readers & when we get the feedback on how useful they found it, our joy doubles 😉 😀

These are so perfect for the summer!

I love gelatos! Frozen treats are such a fun way to cool off!