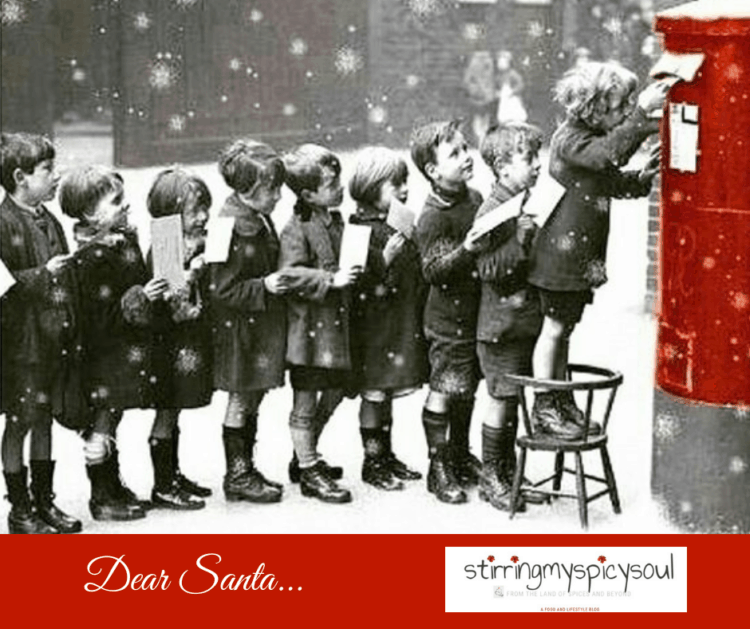 Did you know that there are some delightful holiday traditions unique to each home, during this season of giving and sharing?

The earliest one in the season is a letter to Santa. If you have little ones at home, join in the magic and don’t spoil the fun for them.

When and how did the holiday tradition of writing to Santa begin?

The history behind writing Santa letters is about as mystical as Santa himself.

After much research there really is little information as to how the tradition of writing Santa a letter started, but what was found was one single reference to a letter written from a little girl in the 1200’s to the real St. Nicholas.

In the letter she wrote “St. Nicholas patron of good children, I kneel for you to intercede. Hear my voice through the clouds And this night give me some toys. I want most of all a playhouse with some flowers and little birds.”

It seems that the tradition of writing to Santa to ask for gifts really didn’t take hold until the late 1800’s but has been a mainstay in children’s and their parents lives ever since.

And as the tradition goes on, little boys and girls continue to sit down with paper and pencil, or crayon, and write to Santa telling him how well they have behaved throughout the year, detailing the good things they have done, and why they deserve to be bestowed with the gifts that they desire.

How do you write a letter to “Dear Santa”?

Do you want your child to get greetings from the North Pole ?

“Greetings from the North Pole Post Office” letters must be received by the Anchorage, AK, Postmaster no later than Dec. 13.

Santa’s helpers at the Postal Service will take care of the rest.

Find all about it @ https://about.usps.com/holidaynews/letters-from-santa

Where do the letters to Santa actually go?

The Postal Service says letters to Santa should be addressed to 123 Elf Road, North Pole, 88888 (which is Santa’s workshop and not his residence). Make sure to include a return address and a stamp.

Children can send letters to the North Pole all year, but the Postal Service only accepts them for Santa until Dec. 13th.

This year since everything is virtual, have your child email to Santa at his email id.

You can get email messages from Santa Claus during Christmas here.

More suggestions on letters to Santa

In your holiday list of movies to watch, pick among the following to watch your favorite “Dear Santa” movie

“IFC Films is getting into the holiday spirit a little early as it has acquired the North American rights to documentary Dear Santa directed by Dana Nachman (Pick of the Litter, Batkid Begins).

The family-friendly Christmas feature documentary takes a look at Operation Santa, a 100-year-old program of the United States Postal Service which connects children with Kris Kringle himself.

Dear Santa will kick off the holiday season with its December 4 release date.

Each year, hundreds of thousands of letters to Santa arrive at Post Offices around the country. Through Operation Santa, the USPS makes it possible for the public to safely adopt these letters and make children’s dreams come true.

In 2019, Nachman received unprecedented access to the beloved program to make the documentary. From big metropolitan cities to small towns, the film takes audiences on a magical journey as it spotlights various Operation Santa Centers all across the country.” ( Ref: https://deadline.com/2020/09/ifc-films-documentary-dear-santa-dana-nachman-1234576701/)

Santa’s charm is undeniable, whether you were first introduced to Jolly Old Saint Nicholas by watching the classic film Christmas Vacation, or perhaps a late night reading of the Christmas poems for kids.

No matter the introduction, you can’t deny the magic of Jolly Old Saint Nicholas. Yes, his impossible Christmas night present distribution and ability to fly a reindeer-powered sleigh aside, Old Saint Nick really does have something to teach us about the generosity and spirit of the Christmas season.

So whether you are playing secret Santa or you are celebrating him, take a walk down memory lane and relive the child-like wonder and the joy of giving this Christmas season with your children this year.

“Of course there is a Santa Claus. It’s just that no single somebody could do all he has to do. So the Lord has spread the task among us all. That’s why everybody is Santa Claus. I am. You are.” ~Truman Capote