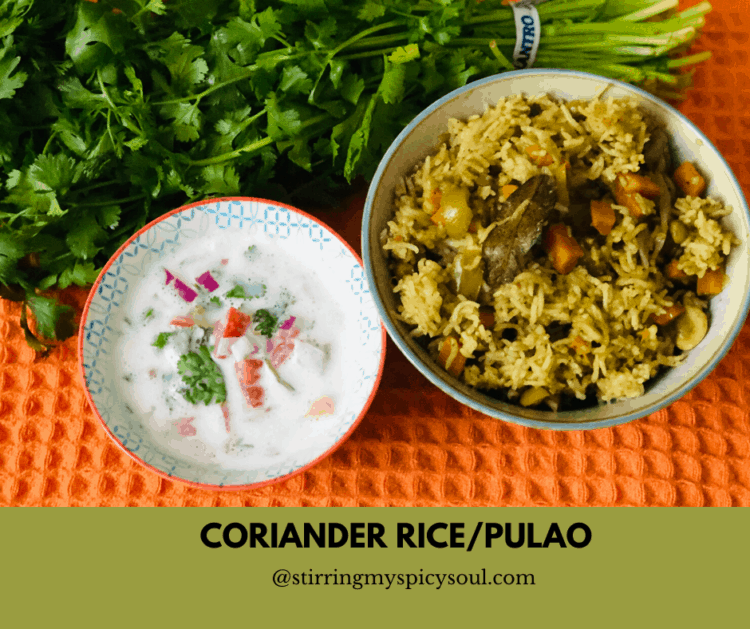 Coriander Rice/Pulao is a flavorful and spicy rice dish with a sweet and floral aroma.It is vegan and is a gluten free dish.This healthy, nutritious dish is a favorite among the many South Indian variety rice dishes. It is made with Basmati rice and flavored with fresh coriander/cilantro leaves and spices.

Coriander is an annual herb in the family Apiaceae. It is also known as Chinese parsley.All parts of the plant are edible but the fresh leaves and the dried seeds are the parts most traditionally used in cooking.

In the United States the stems and leaves of the Coriander herb, are usually called cilantro. The flavor of cilantro is vastly different from that of coriander seeds.Cilantro has a complex but delicate flavor with a hint of pepper, mint and lemon.

What do you use coriander for?

Coriander is often used in Indian, Spanish, Mexican and Latin cuisine. It is a common ingredient in spice rubs, marinades, chilis, sauces, soups and curries and works well with onions, bell peppers, tomatoes and potatoes.In Indian cooking it is used in chutneys, as a garnish, in festive rice preparations like Pulao and Biryani.

Pulao or Pilaf is a rice dish, whose recipe usually involves cooking in water, stock or broth. A rice dish made by adding spices, and other ingredients such as vegetables or meat.The success of a good pulao is based on achieving cooked grains that do not adhere.

What is the difference between pulao and biryani?

Biryani is made using the draining method of cooking, whereas pulao is made through the absorption method. While preparing biryani, the rice is par-boiled in water and then drained. Whereas while preparing pulao, the amount of water or stock is completely absorbed by the rice and vegetables in the dish

Pulao can be made using vegetables or meat. Some of the pulao recipes I have tried and tested in my kitchen are listed below :

Coriander rice is a simple and easy recipe, delicious and healthy too. Do give it a try in your kitchen.

What are some of the recipes you have used Coriander/Cilantro leaves in?