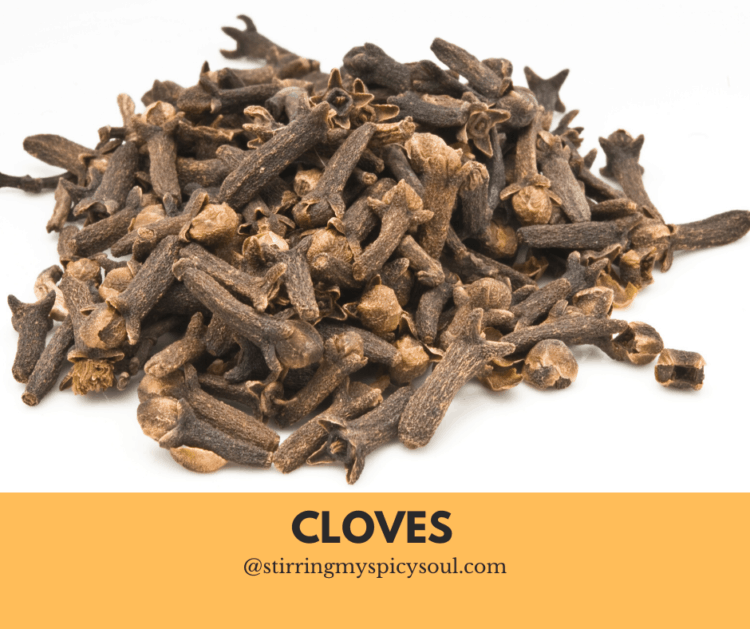 Cloves are the aromatic flower buds of a tree in the family Myrtaceae, Syzygium aromaticum. They are native to the Maluku Islands in Indonesia, and are commonly used as a spice. They are also grown in India and Madagascar.

In a essential oil form they are used widely in aromatherapy for stress relief and traditional non- western medicine.

Cloves are a pungent warm spice with an intense flavor and aroma. The eugenol in the clove is responsible for its flavor.When you taste them, they have a sweet, astringent (creates dryness in the mouth) and bitter taste with a noticeable amount of heat.

The spices used in Indian cooking like cinnamon, star anise & nutmeg also generate heat, but tepid when you compare it with cloves. Hence it is wise to use less cloves in a recipe.

How do you use cloves in a recipe?

It is best to pick out cloves before serving the dish, since their hard woody texture and the astringent quality would be unpleasant to bite into.

Clove’s aromatic flavor adds a spicy warmth to both sweet and savory dishes. However, it should be used sparingly, as its potent flavor can overwhelm a dish.

Depending on what recipe, one plans to use them in, it is best to grind whole cloves when needed. The flavor and the potency of the spice remain when they are freshly ground instead of buying store bought ones, which have been sitting in the spice aisle for long.

One can use a spice grinder, a coffee grinder or simple mortar and pestle to grind cloves. Remember to clean the grinder well after use, since the aroma of the spice is strong and will linger.

Cloves and all other spices are best stored in an airtight container, preferably in a cool and dark place. The Indian Spice Dabba is a perfect fit for all kinds of spices used in Indian cooking.

I hope this post on Cloves, the spice used in Indian cooking was helpful to you in getting to know more about using them in a recipe. Now that you understand how they taste like and how much to add in a recipe, I really hope you incorporate them in your cooking. They come with so many health benefits !

Have you tried using cloves in your recipes?

Do you use them whole or in a a ground form?

What are some of the recipes you have used them in ?

Share below in the comments section, would love to hear them.