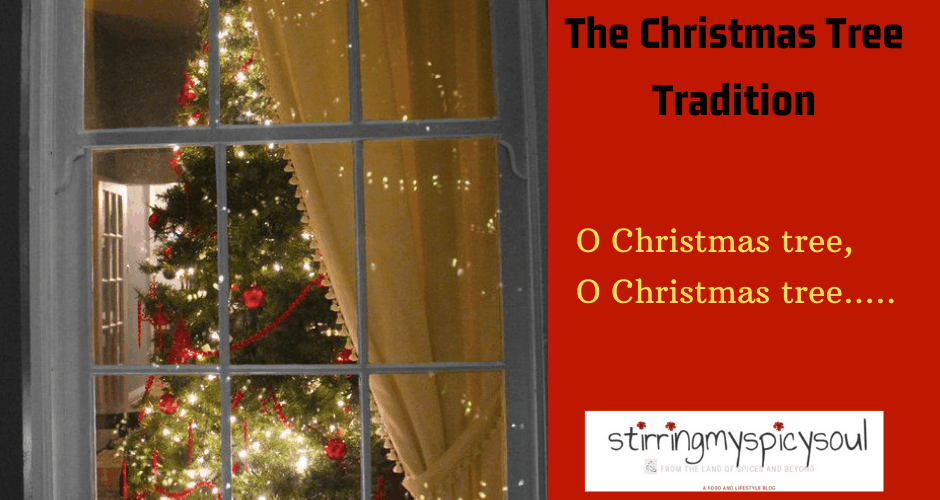 Your boughs so green in summertime
Stay bravely green in wintertime…..”

Decorating the house with fresh greenery is one of the oldest winter holiday traditions. Evergreens have been a part of winter festivals since ancient times. Evergreens are used to represent everlasting life and hope for the return of spring.

There is nothing as beautiful as watching the twinkling lights from the Christmas tree in a dressed window during the holiday season.The warmth that emanates from that sight warm many a cold winter night. I have often wondered how and when the Christmas tree tradition started, …..and here are some facts on how the Christmas tree came to be…..read on…

The History of a Christmas tree

The evergreen fir tree has traditionally been used to celebrate winter festivals (pagan and Christian) for thousands of years.

Pagans used branches of it to decorate their homes during the winter solstice, as it made them think of the spring to come. The Romans used Fir Trees to decorate their temples at the festival of Saturnalia. Christians use it as a sign of everlasting life with God.

Nobody is really sure when Fir trees were first used as Christmas trees.It probably began about 1000 years ago in Northern Europe.

How did the tradition of Christmas trees start?

Long before the advent of Christianity, plants and trees that remained green all year, held special significance for people in the winter. Just as people today decorate their homes during the festive season with pine, spruce, and fir trees, ancient peoples hung evergreen boughs over their doors and windows.

What does the Christmas tree symbolize?

In many countries it was believed that evergreens would keep away witches, ghosts, evil spirits, and illness.

In the Northern hemisphere, the shortest day and longest night of the year falls on December 21 or December 22 and is called the winter solstice. Many ancient people believed that the sun was a god and that winter came every year because the sun god had become sick and weak. They celebrated the solstice because it meant that at last the sun god would begin to get well.

Evergreen boughs reminded them of all the green plants that would grow again when the sun god was strong and summer would return.

The ancient Egyptians worshipped a god called Ra, who had the head of a hawk and wore the sun as a blazing disk in his crown. At the solstice, when Ra began to recover from his illness, the Egyptians filled their homes with green palm rushes, which symbolized for them the triumph of life over death.

Early Romans, marked the solstice with a feast called Saturnalia, in honor of Saturn, the god of agriculture. The Romans knew that the solstice meant that soon, farms and orchards would be green and fruitful. To mark the occasion, they decorated their homes and temples with evergreen boughs.

In Northern Europe the mysterious Druids, the priests of the ancient Celts, also decorated their temples with evergreen boughs as a symbol of everlasting life.

The fierce Vikings in Scandinavia thought that evergreens were the special plant of the sun god, Balder.

Germany is credited with starting the Christmas tree tradition as we now know it in the 16th century when devout Christians brought decorated trees into their homes. Some built Christmas pyramids of wood and decorated them with evergreens and candles if wood was scarce.

It is a widely held belief that Martin Luther, the 16th-century Protestant reformer, first added lighted candles to a tree. Walking toward his home one winter evening, composing a sermon, he was awed by the brilliance of stars twinkling amidst evergreens. To recapture the scene for his family, he erected a tree in the main room and wired its branches with lighted candles.

Who Brought Christmas Trees to America?

Most 19th-century Americans found Christmas trees an oddity. The first record of one being on display was in the 1830s by the German settlers of Pennsylvania, although trees had been a tradition in many German homes much earlier.

The Rockefeller Center Christmas Tree dates back to the Depression era. The tallest tree displayed at Rockefeller Center arrived in 1948. It was a Norway Spruce that measured 100 feet tall and hailed from Killing worth, Connecticut.

The first tree at Rockefeller Center was placed in 1931. It was a small unadorned tree placed by construction workers at the center of the construction site. Two years later, another tree was placed there, this time with lights. These days, the giant Rockefeller Center tree is laden with over 25,000 Christmas lights.The tradition of seeing the tree each year is one of the many quintessential holiday experiences in the Big Apple.

Where did the custom of decorating Christmas trees originate?

Other than the candle aesthetic already established in Europe, decorations like ornaments (often imported from Germany) became more popular in the late 1800s, and homemade decorations like cookies and garlands (like popcorn, berries, nuts, and more) became decorating staples.

These more homespun decorations gave way to electric lights and synthetic materials, like tinsel, as technological and industrial developments changed throughout the 20th century.

The popular Shiny Brite ornaments, inspired by imported German glass ornaments, marked the beginning of the U.S. ornament industry in the early-to-mid 1900s

Before Christmas trees were considered essential decor for the holidays, they were simply fragrant evergreens that served as a source of joy during the harsh winter months.

Have you put up your Christmas tree yet? What are your fondest memories around the Christmas tree? Please be sure to share them in your comments below.

Blessed is the season which engages the whole world in a conspiracy of love.

Tulip Season When your walkways are lined with bri

Tulip Season “And in the end, love tastes like t