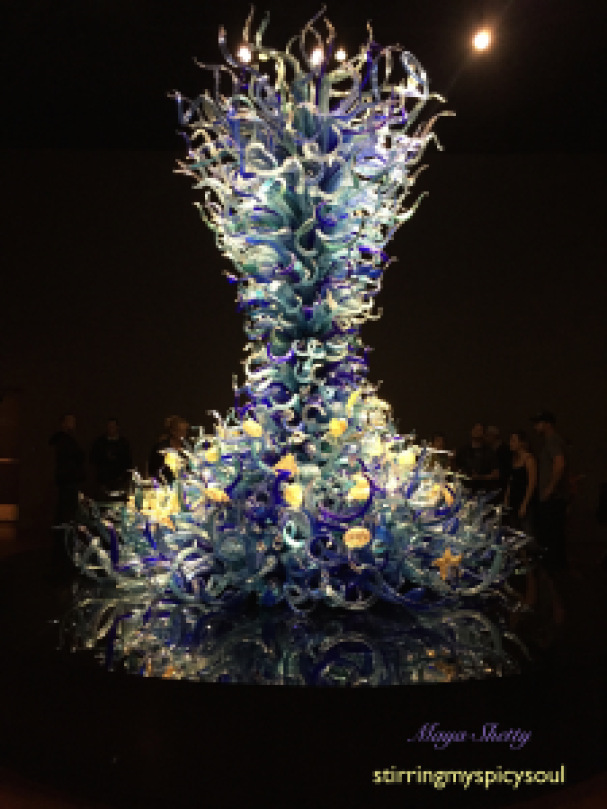 This was our first trip to the Pacific Northwest,I was excited…traveling always does that to me, the sights you will see the people you will meet, the culture you will imbibe in those short few days and the way your mind would expand with all that discovery……but nothing prepared me to this beautiful unfolding of the Chihuly glass artwork in the Seattle Center.Getting there was pretty easy, the city is well connected through Public Transit and the Monorail, the weather was awesome,the breeze just perfect and you step into this garden to be inspired beyond belief. Dale Chihuly is the artist who creates these masterpieces, it’s fascinating to look at his artwork through his eyes, his inspiration is from the sea, the sea creatures , the various plants around,his mother’s garden, his various travels is what the information says, who wouldn’t be inspired by that deep blue sea & the lovely mountain ranges and what to say of the amazing flowers that grow in Seattle…..but to think one can create such wonders  is inspiring to say the least.

Persian Ceiling : Chihuly began Persian series in 1986, while experimenting with new forms. Originally, he displayed Persians on pedestal compositions often with smaller shapes nested in larger pieces.Later, working with an architectural framework, he mounts larger forms to walls and suspends them as overhead compositions.The first Persian ceiling was presented in his 1992 exhibition opening the new downtown Seattle Art Museum. Lit from above and resting on a flat glass pane, the elements of the Persian Ceiling come together to provide an immerse experience in color and shape.

Next came the collection of a garden of thousand flowers called Mille Fiori in Italian. Chihuly assembles gardens of glass that includes many of his series of works.First exhibited in 2003 , at the Tacoma Art Museum, the techniques used to create the Fiori, rely less on tools and more on the use of fire, gravity and centrifugal force.His mother’s garden seemed to be the inspiration behind these pieces.

Highly influenced by the Japanese art of flower arrangement called Ikebana, he created another masterpiece, which just transforms you to a space where you probably are flower maiden floating on a boat full of flowers of  all colors & hues.

The next room opened up to a gorgeous display of chandeliers,that your heart does a somersault with joy as you soak in all the color  in wonderment.

Next  you step into the Chihuly Garden of Glass, you suddenly feel like Alice in Wonderland , which do you look at first……