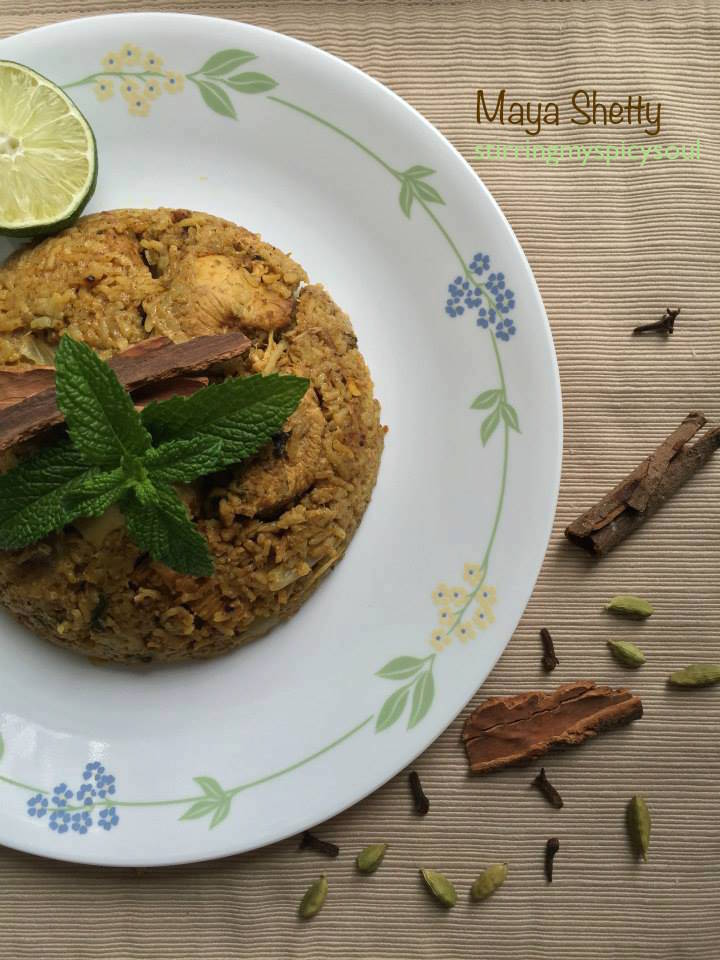 “Thalappa” means a turban/traditional head dress, “kattu” is to wear it around one’s head….this authentic dish is named after the man with the turban, who first brought it to the public eye.

The origin of this spicy festive rice preparation is in the city of Dindigul, in the South Indian State of Tamil Nadu.To say that I love this dish would be an understatement, when I lived there,I would use every excuse I could find to dine in this restaurant, such was the lure of this delicious dish.

This morning , woke up with a craving to taste this “Thalapakattu Biryani”, alas, no such restaurant in sight, so what’s better ? …recreate the magic in your own kitchen starting from scratch, after all you remember the flavor only too well .

A wee little bit about the history of this dish…Like they say behind every successful man is the big heart of a woman, who downplays her talents to make her man look good, this recipe has a flavor of that generous heart too.Started by a man named Nagasamy Naidu in the city of Dindigul, in 1957,who after trying his hand at various other jobs and not succeeding, decided to start a restaurant with his wife’s delicious cooking of which her Biryani was the masterpiece…the rest as they say is history. Currently, the third generation is running the business successfully with various branches all over the State, with plans to expand Internationally.

What started as “Ananda Vilas Biryani Hotel “in Dindigul, was soon addressed as the “Thalappakattu Biryani Place” to honor the man with the turban/traditional head dress whose vision gave birth to the popularity of this amazing dish from it’s humble beginnings.Needless to say, the aroma of the dish drags you into the restaurant even if you were driving past it.

The secret lies in the rice that is used for this dish called the “Jeeraga Samba” rice, which is supposed to resemble a cumin seed, hence the name “Jeera”(cumin) in its looks & has the amazing quality to imbibe the flavors of the spices it is cooked with, unlike the Basmati rice which has its own flavor and is widely used in preparing festive rice dishes in India.

Another striking feature of this dish is that it is cooked with meat from farm raised cattle & poultry, especially in the “Kannivadi” & “Paramathi” areas.
Thought, I’d add a clipping of the making of this dish, the spices, the way the rice is cooked, traditionally for those who have never been to these parts of India….

Some of the links to my published blog post recipes using mint leaves are listed below for your interest :

Yes, indeed ! LOL! that would clearly ensure an aromatic plate of Biryani for sure 🙂