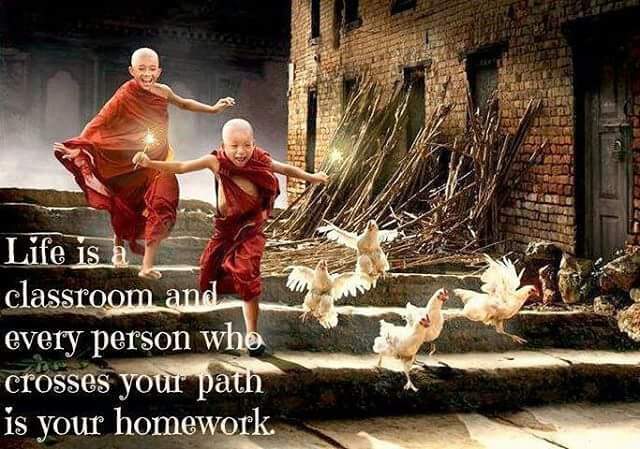 You never know who will cross your thoughts in any given day, but being open for such pleasant thoughts adds to the joy of living.

This morning I was trying to fix breakfast, some of the left over rice from yesterday stared at me from a water soaked vessel……No ! I do not follow the ‘Desi- American’ way of freezing left over rice from yesterday, I still follow the traditional way of soaking it in water to be used the next day.Suddenly an idea clicked in my mind, how about if I make some quick comfort curry like ‘Keerai Kootu/ Spinach and Lentils curry’ & then make it a brunch instead of breakfast, then I would still have some time to watch that holiday movie on Netflix  😉 that I have been saving for ‘uninterrupted holiday movie time’ 😀 :D.

It was raining outside, so a comfort food was certainly on the menu! The curry was done & I squeezed the wet rice from it’s water soaked stupor to mix it with the curry & have it for brunch. A sudden fear gripped me, what if that old saying became true, wasn’t there a belief somewhere while growing up saying, “The left-over rice soaked in water though considered very healthy, one tends to put on weight fast ? I paused a bit, ignoring the voice in my head, loudly telling to myself, “It’s the sweater season after all, a little weight can’t hurt” and gladly went on to finish my brunch.
It was while having my brunch that memories flooded me.While growing up at my parent’s place there was this young girl who came to clean our garden & yard each day, promptly at daybreak, she never missed a day, from as far as I can remember.Her mother used to work for my parents earlier, when she retired her daughter took up the same chores,her name was ANDAAL.She was not only efficient she did her chores with the speed of lightning, before you know it, the front yard was spotless & so was the garden.She went to college after her work,my parents did help her out with her schooling and later on in her life too.

She would always have the left over rice for breakfast before she left to school each morning.She was healthy, brisk & active all her life.Later when she had a baby she would bring her baby to work, while the baby played on the side she would finish her regular chores.Those were the days, when we were paper thin as kids ( yes, those days existed too!) so my mom in her attempt to plump us up a little bit gave us some tonic/health drink for the same effect.Nothing happened ! in striking contrast,the baby who came to play in our home, was so cuddly plump & his mom gave him the same left over rice she ate each day.

One day in frustration my mom complained to my grand mom who was visiting,that her kids are not putting on any weight, in spite of her attempts to feed us well ( those days putting on weight translated to being healthy as kids, perhaps why the Indian moms worry ourselves sick if our kids do not eat well, it’s fine tuned in our psyche’s you see !! 😉 🙂  )          My wise grand mom in her age old wisdom gently replied,       ” Maybe you should give them some left over rice too !”      End of topic, there were no more complaints of us kids looking pathetically thin.
Years later I have discovered I am capable of putting on weight by just a mere thought about it, don’t ask me how, I am still trying to figure that out 😉 .But yes, that was the ANDAAL moment this morning, how efficiently she raked every fallen leaf off the garden path & kept our yard so beautiful each day.