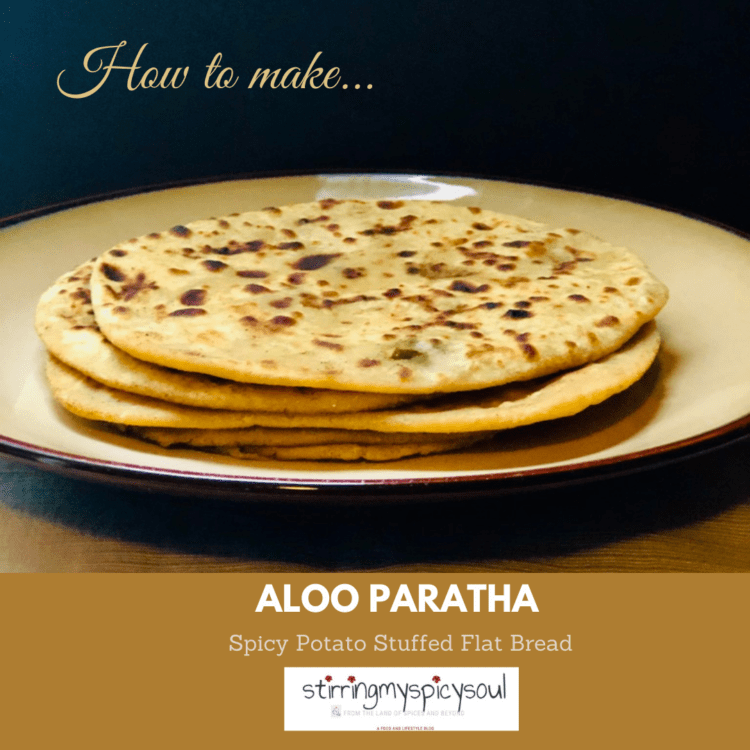 Aloo Paratha/ Spicy Stuffed Potato Paratha is a delicious and flavorful bread dish originating from the Indian subcontinent, a staples of many a home in the Punjab region.

The recipe is one of the most popular breakfast dishes throughout the western, central and northern regions of India as well as the eastern regions of Pakistan.

These parathas/ flat bread are made with whole wheat flour, potatoes, spices and herbs. Paired with sweetened yogurt or pickle, they hold a royal place in the dinner menu’s of restaurants across North India.

What does Aloo Paratha mean?

Aloo is the Hindi term for Potatoes, Paratha’s simply mean a kind of Indian flat breads.

How is Aloo Paratha made?

The first step in making Aloo Paratha is to make a dough with whole wheat flour.

Next is to prepare a potato stuffing flavored with spices and herbs, to go into the dough ball.

When the potato stuffing is completely sealed within the dough ball , it is then rolled out into flat breads. Then they are pan fried and served hot with butter or sweetened yogurt.

Do Aloo Parathas taste the same all over the India?

Aloo Parathas are a popular breakfast or dinner menu item all over India and are most authentic to the state of Punjab.

They are delicious flat breads and are most sought among the restaurant food items.They may vary in taste a little depending upon the region in India, where they are made in, depending on the unique spices that are used in the recipe.

Want to know more about Indian Spices and how to use them in your cooking?

Check out our E-Book on the Complete Guide to Essential Indian Spices here.

Tips to make the best Aloo Parathas at home

What are the ingredients used in making Aloo Paratha?

The basic ingredients are whole wheat flour, potatoes, spices, herbs along with grated ginger, salt, and ghee/butter or oil.

Why does my aloo paratha break?

If the stuffing inside is too moist/wet due to overcooked and mushy potatoes.

If there is not enough dough covering the stuffing or if too much dough has been pinched off, after stuffing, there is a chance for the stuffing to leak out due to improper seal , while you roll the paratha.

How to freeze/store aloo paratha for later use?

If you are planning to store parathas in the freezer for later, partially cook them on the griddle or tawa, allow them to cool completely on a plate.

Next use parchment/butter paper to separate each one and stack them up gently inside a freezer safe ziploc bag and place them in the freezer, after labelling the date on the bag.

When you are ready to use them, gently take each one of them out of the ziploc bag and smear a little ghee and pan fry them as needed.

How long does parathas last in the freezer?

It would be best to use them within 2 months of freezing them, if done well they could last longer, but the taste may differ a bit from wen they are freshly made.

Is paratha a roti?

One of the most popular unleavened flatbreads in India for its versatility, parathas are flaky, chewy and denser than chapatis.

The result is a beautiful crisp flatbread that can carry and hold up well against thick curries and dry stir-fries without disintegrating.

How long can you keep the dough/Atta in the refrigerator?

If you cover the dough in cling wrap, store it in air-tight container it may last long up to 36-48 hrs. Best is to use the dough within 24 hours.

Now that you know all about the secret of making deliciously good and authentic Aloo Parathas, go on and try making them in your own kitchen, at home.

You can thank us later for saving you dollars on eat outs from the Desi restaurants around town. What’s more you can tweak the healthy bit on the ingredient additions as per your preference, be it the spices or the coating of ghee on your parathas.

Nothing like a hearty dinner with Aloo Parathas on a cold winter evening, listening to some ghazals or old Indian music.You get the picture, right? Home is just a thought away!

Oh yum! This looks so good! I look forward to trying the recipe.

Thank you. Easy to try, delicious to eat. Enjoy!

These are so yummy, yet haven’t seen a recipe for them till now!

Never heard of it before, but it sounds really delicious!

This looks and sounds amazing!!

Yum! I have Indian friends that have made this for me. I haven’t attempted it on my own, but the recipe doesn’t seem to difficult.

How fun, that you get to taste yummy Indian food at your friends. This certainly is an easy recipe you can try at home any time.It is meal by itself.Enjoy!

These sound great! Will have to make them.

Thank you.Do share your feedback when you do, would love to hear how it turned out for you. Have fun!

Wow those look amazing. Do you do mail order – LOL

Thank you Wish I could 😀 Enjoy!

Melissa | It's A Joyous Journey

These sound really good! My husband got a tortilla press for Christmas and has been making homemade tortillas. I wonder if the press would work for these, too…

Author
Maya Shetty
Reply to  Melissa | It's A Joyous Journey

Perfect! Yes a tortilla press would definitely work for these paratha’s too, as long as you seal the stuffing well and gently press. What a lovely and useful gift gift for Christmas. Enjoy !

I have never made any type of dough before. This looks like something my family would enjoy!

Go on, give it a try.It’s easy to make & your family will love it!

Oh! I ate them once and really liked it! I got inspired to make it this week.

Thank you for the idea!

You are most welcome.They are delish, for sure. Maybe, you want to tweak the spices for your lil’ ones, if they enjoy it less spicy.Give it a try.Who knows, they might start loving potatoes starting with this recipe 😉 😀

This looks delicious! I would love to try it out!

Thank you. Please do share your feedback when you try it.It’s always good to hear from our readers and it also will encourage others here to try & succeed.

Thank you. So happy to hear that. Enjoy!

This looks so tasty! I don’t use Ghee, but I could use a plant-based or vegan butter and I bet it would turn out too. Going to give it a try! Yum!

Thank you. Yes, you definitely can sub ghee with a plant based or vegan butter for this recipe.Do share with us when you try it, love getting feedbacks on our recipes. Enjoy!

Great step by step directions. Thank you. Will be trying it.

Glad to hear that our step by step instructions are helpful to you. Please do share your feedback when you give our recipe a try.

I love this, but never realized how complicated it was to make! Indian dishes are delish!

Thank you. They look complicated , but once you follow the step by step instructions , they are quite easy to make. Glad to hear you enjoy Indian food! I agree, they are delicious eaten plain or with a side dish.

Definitely giving this a try! Thank you for the great directions!

You are most welcome. Enjoy!

I could totally make this with vegan butter instead of Ghee. I love Indian food, in fact, I just had Chana Masala for dinner tonight.

So happy to hear you enjoy Indian food.Our blog is filled with Indian recipes, for you to try if you are interested.On the other hand, Yup, you definitely can use vegan butter instead of ghee for the recipe.Aloo Paratha, would go perfectly well with the Chana Masala too. Enjoy!

Ive never heard of this food before but it looks yummy. Thanks for sharing how to make it!

My pleasure.Try it in an Indian restaurant perhaps, for the first time, if you want to know how it tastes like. If you enjoy it, then you can try making them at home.It is similar tortillas, only wheat flour is used to make them and they are stuffed with spicy mashed potato filling. Enjoy!