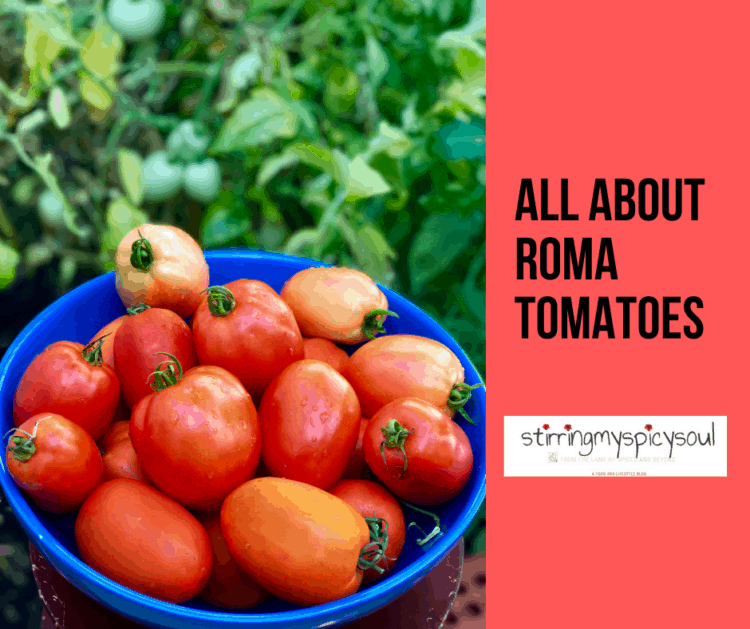 Prized for its use in tomato paste and sauces, Roma produces a large harvest of thick-walled, meaty, bright red, egg-shaped tomatoes about 3 inches long and with few seeds. This tomato is not juicy. This is not a slicing tomato. Instead, the flesh is thick and drier so that it will cook down into a thick sauce. Cooking intensifies its flavor.

The tomato is the edible, often red, berry of the plant Solanum lycopersicum, commonly known as a tomato plant.

*Since I grow and use Roma tomatoes for most of my Indian cooking, I am going to focus this blog post on just the Roma tomato variety. Occasionally, I do use Cherry tomatoes on skewers while grilling.

How the tomatoes came to be ?

Italy grows a staggering 4.9 million tons of tomatoes a year. The tomato stands as a symbol of Italian cuisine for many. However, despite its contemporary ubiquity the tomato is a relatively recent phenomenon in Italian culture.

It only became introduced into the culinary canon after the Spanish conquistadors brought the fruit back from the South American Andes in the sixteenth century. Its popularity spread rapidly, becoming the base for millions of sauce, soup, salad and pasta recipes b’coz of its color, flavor and inherent versatility.

Over one hundred varieties of tomato are grown in Italy, with the country’s southernmost regions known in particular for producing the most delicious varieties (including the famed San Marzano plum). In fact, it is said that the Neapolitans introduced the tomato into Italy’s kitchens, and today it is almost impossible to imagine an Italian kitchen without the fragrance and color of fresh pummarola.

What are Roma tomatoes ?

Roma tomato or Roma is a plum tomato popularly used both for canning and producing tomato paste because of its slender and firm nature. Commonly found in supermarkets in some countries, Roma tomatoes are also known as Italian tomatoes or Italian plum tomatoes.

How are Roma tomatoes grown?

What is so special about Paste Tomatoes?

Paste tomatoes — whether Romas, the San Marzano tomato, are both heirloom tomatoes. Heirloom tomatoes, which means you can save the seeds from year to year. (Check out this youtube video, on a garden enthusiast who has inspired me greatly in recent times of growing plants from seeds in a small space)

Paste tomatoes share some traits compared to other varieties….

A Roma tomato plant doesn’t need a lot to thrive. In fact, I’ve found them to be some of the easiest, hardiest tomatoes to grow in my kitchen garden. They tend to be a sturdy plant, producing flavorful nuggets of tomato goodness in the heat of the summer.

How much space do the tomato plants need to grow?

A single tomato plant can yield as much as 20-30 pounds per season, so depending on your family size and space available plant accordingly.

Roma tomatoes don’t need too much space to grow, but you should give them a little breathing space. Leave a foot or two of space between each tomato plant for prime growing conditions.

When is the right time to pick Roma Tomatoes?

Roma tomatoes are determinate, so instead of ripening at various times throughout the season, they will ripen at roughly the same time. They’ll be ready to harvest around three months after they’re first planted.

Pick them when they are table ripe – bright red, firm to the touch, and no longer increasing in size on the vine, if you plan to use them in your salsa, salads, in a rich pasta sauce or in your curries.

Pick them when they’re a little darker red and slightly softer to the touch if you are planning to can them. Allowing them to ripen a little longer, helps in canning.

How to store Roma Tomatoes?

Tomatoes are the major dietary source of the antioxidant lycopene, which has been linked to many health benefits, including reduced risk of heart disease and cancer. They are also a great source of vitamin C, potassium, folate, and vitamin K.

How to use Tomatoes in your recipes?

Personally, I use tomatoes in most of my recipes which involves Indian cooking.Some of the most common uses of tomatoes can be found in the following recipes, but is certainly not limited to these.

Now that you know all about Roma Tomatoes, how to grow, store and use them in your cooking are you willing to give these tomatoes a try in your sauces and curries?

Please leave a comment below to let us know how you have used them in your recipes?

If you try any of my recipes, would love for you to snap a quick photo of your recipe and tag us #stirringmyspicysoul on your social media feeds to get the word around and encourage readers like you.

Share this post with a #stirringmyspicysoulon your social media feeds and let your friends and family know.They can always subscribe to our weekly newsletters and regular updates by signing up here or by visiting our blog.

Thanks, Maya, for the informative post about Roma tomatoes. I enjoyed reading it!

Thank you, Catherine for stopping by my blog & sharing your thoughts & kind words. Always encouraging to know that my friends & readers found the posts informative & helpful. so appreciate your sharing .