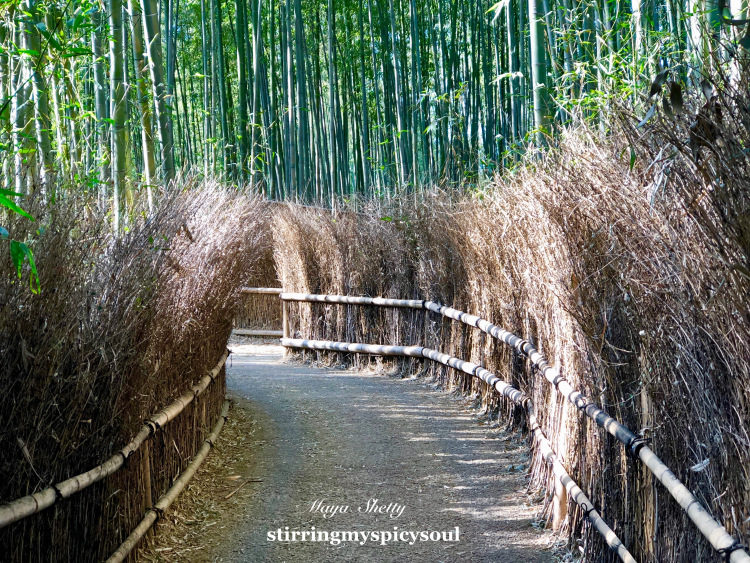 A visit to the beautiful Sagano Bamboo Grove, located in the gorgeous Arashiyama district of western Kyoto, Japan, is breathtaking to say the least. The beauty of the bamboo’s and the gentle rustling of the leaves has  it listed  among the “100 Soundscapes of Japan” by the Ministry of Environment.

In Japan,  the Shinto shrines and Buddhist temples are often situated near bamboo groves, which are viewed as a clever means of warding off evil, while the bamboo is seen as a symbol of strength.

It’s no coincidence that Tenryu-ji Temple , a UNESCO World Heritage Site is situated right beside the entrance to the bamboo grove.

It was on my bucket list of places to visit ever since I saw the first pictures of it on the net.So here I was surrounded by the lush green peace of the bamboos, thrilled beyond measure !

This densely packed bamboo grove in Arashiyama district of Kyoto, Japan attracts both locals and visitors from all over the world.

You can access it directly from the main street of Arashiyama, a little to the north of the entrance to Tenryu-ji- Temple but it’s best paired with a visit to that temple (exit the north gate, take a left and you’ll be in the grove in no time). There’s just one main path through the grove, which leads slowly uphill. Once you get to the top of the hill, the entrance to the sublime Okochi -Sanso Villais right in front of you (go in, you won’t regret it).

A little shrine greets us at the entry along with a store that sells  little trinkets and mementoes to take home.

Kimono clad teenage girls in their brightest cheerful self’s are seem walking daintily within the bamboo grove and all around you, taking the classic group selfies .

A romantic ride among the bamboo grove on a ‘jinrikishaw'(traditional Japanese rickshaw’s) by a shabu ( rickshaw driver) who also most of the time is a guide and photographer to the one’s taking the ride, is a common site here.

The joy in the bamboo grove is palpable and so is the peace. If you want to avoid the crowds early morning would be your best bet, weekends are to be avoided completely since it is filled with day trippers wanting that one shot in the bamboo grove that you had so wanted to take 🙂

The traditional rickshaws seemed well equipped, at times the ride could be bumpy due to forest roads, most of them seemed pretty comfortable with their ride.

The classic traditional Jinrikishaws of Japan : Lined up and waiting for the crowds to start their ride of the day.

At times you catch a glimpse of the blue sky, it mostly feels like you are walking in a magical land surrounded by green , the gentle rustling amidst the leaves has a rhythm of it’s own.

Sometimes the silence of the grove is broken by a group of giggling kimono clad teenagers having fun on their day trip, apart from that it almost feels zen like within the grove itself.

Curious to know what they wore on their feet, I followed a group of Kimono clad girls for a short distance …….

….only to find that these heavy wooden sandals with colorful straps was part of the traditional attire sold in the little stores at the entry way.

From downtown Kyoto, take City Bus #28 or #11. For trains, take the Keifuku Arashiyama Line to Arashiyama Station.
For those who want more than a day trip, the top hotel in Arashiyama is luxury ryokan Hoshinoya Kyoto, which can only be reached by ferry. Rates from 20,400 yen per person/night.

Links to our travel stories

If you have plans to visit Japan, this Sagano Bamboo Grove in Arashiyama district of western Kyoto,Japan is a must see. The peace and the tranquility of the place will linger with you longer than your visit.

What are the places you have enjoyed traveling to?Do share your experiences in the comments below.